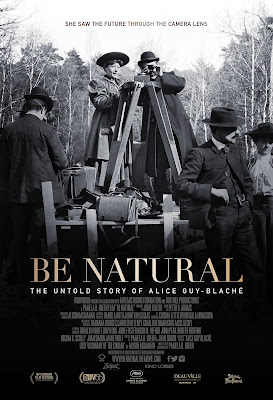 Pamela B Green's portrait of Alice Guy-Blaché is a vital document that will hopefully go a long way in correcting the historical record concerning a one of the true creators of cinema.

Alice Guy was a young woman who took a job working for Gaumont in the 1890's. When she saw the Lumiere Brothers films projected she knew there was something to it beyond recording daily life. She began making narratives for the company before taking over production. She eventually married and moved to the US where she had one of the earliest film studios in Fort Lee New Jersey. Through circumstance her place in film history began to be forgotten. However through her own efforts and the fact that people like Eisenstein and Hitchcock remembered seeing her films helped keep the flame alive that she really did all the things she said- which is largely invented narrative cinema.

Its not so much that Guy just made probably over a thousand films it's that she invented the language of cinema before anyone knew what it was. Eisenstein talks of seeing her films and what she did in decades before the master even made a film ended up in his films where the innovations were heralded as revolutionary. She made films with female protagonists and used actors in ways no one had thought of. She was also making sound films 25 years before the JAZZ SINGER changed history.

The problem for Guy was that she worked at a time when most creators were not credited. As a result it wouldn't take much to make a mistake- as has happened frequently- and films to be attributed to the wrong people.

BE NATURAL goes a long way in correcting the record and setting history straight...

...I just wish it were a better organized film. Bouncing from Guy's story to the search for information on her and her films the film seems not to have a narrative thrust. Is this about Guy or the search to find her story and films? It doesn't always seen clear as we bounce back and forth and back again. I understand she wants to tell the parallel stories but they sometimes scrap against each other with the result we aren't as engaged as we should be. Details are lost, things repeat and the film doesn't seem as tight as it should be. We could also use more details on her personal life.

The problem is all in the editing which just throws the material at us haphazardly. For example its clear Green did dozens and dozens of interviews for the film, we see a huge grid of faces at times, but almost all of them are simply dropped in to say that they never heard of Alice Guy-Blache. Why tease us with something that has no real place in the film? Other threads are picked up and abandoned as well.

What is do find interesting is the stray remark made by an AFI archivist who said that in researching Guy's place in cinema history he discovered materials that indicated that there was a time when female directors were not as uncommon as they are even now as film magazines spoke of their achievements as if it was the norm.

I like BE NATURAL but I don't love it. While it goes a long way to restore Alice Guy-Blache's place in cinema history I don't think it is as good as it should have been. Definitely worth a look, but be prepared to want to know more when it's done.
Posted by Steve Kopian at April 16, 2019