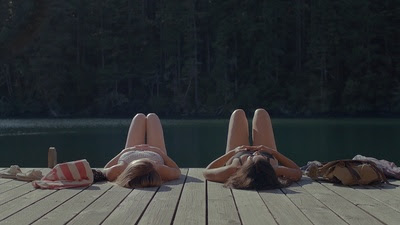 Clementine is a movie about Karen, who recently broke up with her girlfriend. We don't know any of the details about their breakup or their relationship. We see her stalking her ex, listening to old voicemails and videos, and trying to get her dog. She goes to a lake house, which she has to break the window of to get inside, and soon find out it's her ex's lake house Soon after arriving, she meets a younger girl, and they wind up having a friendship of sorts.

This film was slow and boring. I kept waiting for something, anything to happen. At one point there was mysterious sounding music, but it didn't lead to anything. This film was labeled as being a psychological drama, but why? I liked the various characters, but this film didn't make me feel anything other than boredom. Maybe I'm missing something.
Posted by Steve Kopian at April 28, 2019