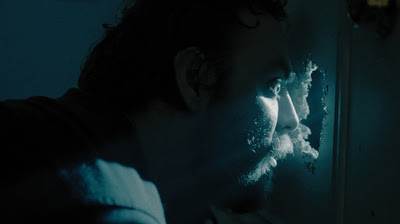 From the director of the off kilter THE BATTERY a film about two guys trapped in a car during a zombie apocalypse comes SOMETHING ELSE, a film about guy who loses his girl and then has his house attacked nightly by a monster. It is equally off kilter and equally not recommended.

There are a couple of problems with SOMETHING ELSE, beginning with the off kilter nature of the film. Billed as a horror film, it really isn't/ Its a kind of comedic romance with a monster in it. Much of the film are flashbacks to the way it was before. It might have worked had it actually been funny, or engaging but the jokes fall flat and our hero isn't really likable.

Then again the whole structure of the film with the evening attacks inter-cut with flashbacks to the good times with the girlfriend doesn't work from the start. The relationship stuff never gets a footing because of the monster/humorous stuff, while the monster stuff is never on long enough to build suspense. Worse until we finally see the beast we never learn enough about the monster to create anything scary in our head. It's just a thing on the other side of the door.

I think the best way to describe it is this film is a mess.

I kind of understand what the directors were going for, but at the same time the telling is so muddled that the tone never is right. We never know what we are supposed to feel and as a result we are left outside the action not caring.

What is this doing at a major festival like Tribeca?

Not recommended.
Posted by Steve Kopian at April 26, 2019

Email ThisBlogThis!Share to TwitterShare to FacebookShare to Pinterest
Labels: comedy, horror, not worth the effort, romance, tribeca 2019