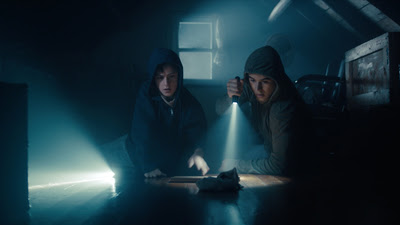 This is a two part review. The first is the nutshell take on the film and the rest is a longer discussion which may give things away.

At its most basic Low Tide is a good, if unremarkable, suspense thriller that will, assuming you don’t think about things too closely, keep you on the edge of your seat. It is a film that will keep you glued to the screen wanting to know what happens next. In an age when we can pretty much say how many films will end ten minutes in, Low Tide manages a few surprises despite following the typical film noir path.

If you want to see a good film give it a look.

Unfortunately it could have been so much better if writer director Kevin Mc Mullin had only had a tighter grasp on the plot details.

As suspenseful as the film is my feelings for it were tempered by plot points that just don’t make a hell of a lot of sense. Time and time again the film does things that requires not so much suspension of disbelief as completely ignoring what is happening. It begins with why everyone is a friend of Red’s. That three seemingly nice guys would be hanging out with the town psychopath doesn’t make sense. Nor does the fact that one of the boys doesn’t know about the stabbing at the community pool.

From there it’s a long unending list of problems (I've hidden them in invisible text so it won't spoil anything for those who don't want to know):
Where are the fourth of July crowds?
Where are all the kids the age of the characters?
Why aren’t the kids caught if they are constantly breaking into summer homes? And if they will only do it to summer homes why are they doing it when people are there?
Why don’t the police take fingerprints? (especially at the old guys house)
If one of the boys sees the map and doesn’t know where it is, how can he lead the cop straight to the treasure? More importantly how does he manage to draw it on his cast so expertly, especially when the cast was previously covered in people’s signings?
How was the treasure originally buried when it had to be dug up with an oar? Why doesn’t anybody bring a shovel?
Why are they listening to the Mets in south Jersey? Shouldn’t it be the Phillies?
Could they be any more obvious about foreshadowing when they look for an anchor to tie up to a dock?
How did they get the bandage for they eye?
And there are even more I’m not mentioning.

The film also suffers from being adrift in time. Looking like now it feels like it’s the 70’s or 80’s. There are no cellphones, but there are cars and the odd items from now. (Addendum: I was informed after this piece went up that the film is set in the late 80's early 90's which presents additional historical issues the least of which is we hear a baseball game between the NY Mets and Tampa Bay Rays which didn't exist until the late 90's)

And while there is even more to discuss there is no point since despite it all the film still holds your attention. Yes, I was talking to the screen from start to finish wanting to know why the characters were doing stupid things, but at the same time I was intrigued enough to not get up and walk out. I wanted to know what happened.

Frankly if you don’t think about it, something most people in the critics screening I attended didn’t do, you’ll love it.

Worth a look but don’t think about the details.
Posted by Steve Kopian at April 29, 2019