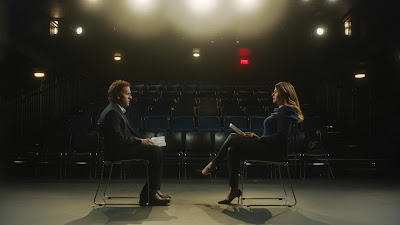 Lorraine Bracco stars as a legendary acting coach who is interrupted while with a client desperate for help for an audition. I can not and will not say more than that.

I honesty am not quite sure how to discuss this film. I like the film a great deal and when I was done I emailed a couple of friends who are covering Tribeca to tell them to see the film. It is a film that is definitely worth a look...

...the trouble for me is that the construction of the film is that this small gem of a film is going to get crushed in the middle of a shorts collection (Forgive me I saw this film isolated six weeks before Tribeca screened it).  The one film ends and another begins structure of festival collections results in some films getting lost as we don't have time to process the film.

With MASTER MAGGIE the measured journey to the end is going to get washed away by the next film. We will get the pay off and then we will be dropped into the next film with the result. My reaction to the film, indeed, my love of the film came from seeing the film isolated. I don't think I would have written a longish review (at least for a short) if I had seen in squeezed in the middle of a collection.

There is a problem with going to a festival and seeing a lot of films. Films collide. What could be and should be a film you love gets lessened by the weight of films around it. This is especially true for me when I cover a festival like Tribeca where I will see almost 100 films in a couple of weeks. It is also true with Short film collections. I've had a couple of discussions with short film programmers and they are forever pulling their hair out because often they have to not only choose the best films to show, but also the best films that will work together. Every programmer I've spoken to has told me about the short films that they had to let go because they couldn't screen any film around it. Yes, these films were great but either they would be lost if something was shown immediately after it or they would make it impossible to show anything after it.

MASTER MAGGIE is a really good film that you should see, but which may end up being reduced by being tucked away in the middle of a shorts collection. What I am afraid of is that if you go and see the film you'll remember the end as a throw away and not the moving journey that got you there. Regardless the film is recommended when it plays again as part of Tribeca's Streetwise collection.

For tickets and more information go here.
Posted by Steve Kopian at April 26, 2019