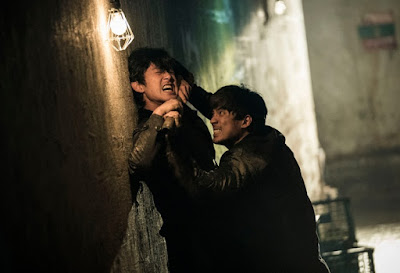 There are many buddy cop films. But how many buddy criminal films could one reasonably count? Not films about anti-hero criminals taking over the underworld, but two cons from opposite walks of life thrown together into a tenuous alliance and forced to battle both the cops and their fellow gangsters? The heyday of Hong Kong heroic bloodshed in the late 80s and early 90s had many stories like this, particularly in the collaborations between Chow Yun-Fat and John Woo. But these frequently starred rogue police officers and hitmen squaring off against both sides. Tzu-Hsuan Hung’s Taiwanese film The Scoundrels is a throw-back to these kinds of movies, but this time both protagonists are dyed-in-the-wool criminals just as the title suggests. Or at least, that’s what the world tells them they are.

Ray (JC Lin) is an ex-basketball player who got kicked out of his league after attacking a cat-caller at a game and now works planting GPS chips on cars so they can get boosted by a car theft ring. Essentially a good man thrust into impossible circumstances, one imagines that if Ray could control his temper he could genuinely turn his life around, as he’s determined to work off his victim’s medical bills. However, he gets shanghaied during a heist by a vicious thief known as the Raincoat Robber (Wu Kang-Ren) who shoots up armored trucks while wearing a raincoat and motorcycle helmet. Forcing Ray to be his getaway driver, Raincoat makes him his hapless lackey as they stick up his car ring boss and go on a crime spree across the city.

Though the plot feels inspired by Woo, the action itself is more akin to Jackie Chan comedies, not in that the action is funny per se, but in that nobody seems to actually get seriously hurt. Bodies are punched, kicked, thrown, smashed, bludgeoned, and thrown off balconies, but one never gets the sense that anyone actually gets killed. Even a fight scene in a Chinese restaurant kitchen with the combatants surrounded by boiling pots, red-hot woks, and kitchen knives is relatively chaste. But the action is still crunchy and kinetic and satisfying, thanks in no small part to cinematographer Scott Hung and veteran Hong Kong editor Wenders Li.

This is an entertaining, promising feature debut for Hung, perfect for scratching an Asian action movie itch.
Rating: 7/10
Posted by Steve Kopian at July 02, 2019