NYAFF Capsule reviews DARE TO STOP US and ANOTHER CHILD

DARE TO STOP US
Hands down one of the very best films playing at this years New York Asian Film Festival, DARE TO STOP US is a loving portrait of Wakamatsu Productions which specialized in Pink films with a decidedly political or non-commercial bend. It was also a studio that gave birth to a generation of filmmakers who cut their teeth in filmmaking. Told through the life of  assistant director Yoshizumi Megumi as she charts her way through the rough and tumble world of low budget filmmaking

This is an excellent film is a love letter to film, the studio and the crazies who churned out the films fast and cheap. It is a delightful, though tragic look at a time now gone. Beautifully acted  and marvelously setting up a sense of time and place DARE TO STOP US sucks us in and takes us along on a wonderful journey.

Highly recommended, DARE TO STOP US is a must see 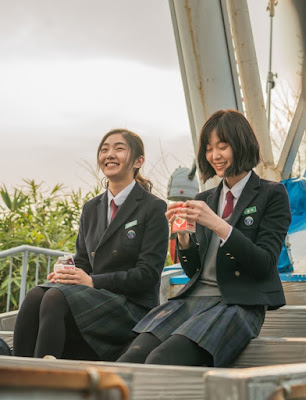 ANOTHER CHILD
Two girls are brought together when they discover their parents are having an affair. Things become complicated when they realize that they are going to be further connected by a baby.

Beautifully acted drama rises above the soapy narrative thanks to the work of the two young ladies in the lead. They sell this story so well that I was carried along with a story that normally wouldn't interest me at all.

See this for the great acting.

Additionally if you aren't in New York Both films will be playing this years Fantasia Fest in Montreal later in July.
Posted by Steve Kopian at July 01, 2019