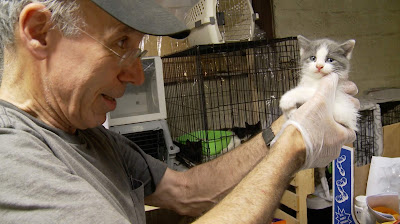 Portrait of some of the people who rescue feral cats in Brooklyn over the course of several years. We get to know them and the cats they rescue.

Steel yourself when you see CAT RESCUERS because when the film ends you will want to go out and rescue some cats. Seriously we have 3 cats in our house and by the end of it I was seriously considering going out and getting a few dozen more because they are all just so damn cute.

I don't know what to say other than this is a great little film about what is being done to stop the explosion of feral cats in Brooklyn. It is an effort that is being repeated anywhere in the country where people who love cats try to make their lives better.

You will have to forgive me if I don't get into a deep discussion about the films because in it's way its full of really cute cats and it's kind of like the cat videos you see on you tube where you oo and ah. Yes this is way more serious and important than watching a cat dance but at the same time the cuteness and coolness of the cats kind of stole my words.

In the end I highly recommend the film, especially if you like cats...and who doesn't. And if you don't what is wrong with you.
Posted by Steve Kopian at July 01, 2019