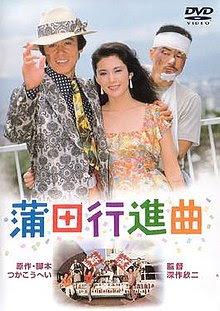 The opening of Kinji Fukasaku’s Fall Guy is a concerto of madcap chaos. On the set of a jidaigeki film, a director struggles to shoot a fight scene with two rival actors. Obsessed with scoring the most close-ups, the two improvise their choreography, slashing this way and that so their faces end up right in front of the camera. Off to the sides, stuntman nervously await their cues only to get prematurely tossed into the fray. Soon the scene is done and one of the rivals runs off for a TV show appearance, leaving the exasperated crew to pick up the pieces of the set and their sanity. The remaining lead actor bickers with the director and his entourage of stuntmen, spouting dialogue with the speed and inflection of a Howard Hawks screwball as they walk through the skeleton of incomplete sets under construction.

It’s a blistering opening that creates a Brechtian tension that lasts the rest of the film that prevents us from suspending our disbelief, telling us that Fall Guy is a deliberate attempt to make a movie about movies that is simultaneously every movie ever made. It’s purposeful artifice taken to the nth degree that haphazardly borrows from every genre imaginable: there’s a forceful sex scene straight out of a roman porno right after a sunny day instantaneously breaks into a thunderstorm when one character collapses into tears; moments of tenderness between new lovers are shot like cloying sweet romantic melodramas right out of the Fifties; “action” scenes on set are shot like chanbara complete with dangerous stunts and large arcs of blood; when the protagonist gets hurt during a shoot his face gets covered with ostentatiously fake bruises, cuts, and bumps. This is not a film about reality, but the reality that can only exist in movies and the sheer joy that comes from creating it.

The plot, though novel, hits every stereotypical melodramatic beat imaginable once it gets going: a hapless stuntman gets shanghaied into marrying the pregnant girlfriend of a leading man in exchange for better parts, gets an inflated head, eventually becomes an egomaniac, but finally redeems himself by performing a lethally dangerous stunt on a goliathan staircase. So much of it is predictable, but because of this odd liminal reality Fukasaku’s created where the movie itself feels like an over-the-top movie-within-a-movie, it feels fresh and delightful.
Posted by Steve Kopian at April 13, 2020