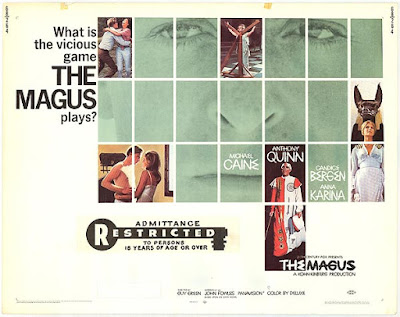 Usually when a book is described as “unfilmable” it’s because the text attempts to do something other than tell a traditional story. We call James Joyce’s Ulysses unfilmable because the narrative is the framework upon which the author hangs his modernist experiments with the English language. We call Mark Z. Danielewski’s House of Leaves unfilmable because the ergodic, hypertextual nature of the text’s formatting on the page is part and parcel with the story. And we call David Foster Wallace’s Infinite Jest unfilmable because, well, how would you adapt its 388 pages of endnotes? I’ve likewise heard John Fowles’ 1965 novel The Magus described as unfilmable, but I suspect it’s only gained that reputation due to its massive length and bizarre story. If someone actually sits down and reads it—like yours truly—they’d find it remarkably straightforward and uncomplicated.

While working as an English teacher on the remote Greek island of Phraxos, Nicholas Urfe falls under the dangerous influence of wealthy businessman Maurice Conchis, a former Nazi collaborator and self-described psychic. Nicholas experiences a number of strange visions involving pagan gods and the spirits of people supposedly deceased for several decades. But these are revealed to be actors cast in a wacko “godgame” orchestrated by Conchis as part of an experiment involving a cadre of internationally renowned psychologists who wish to determine the capacity for human forgiveness in an unwilling subject. Sprinkle in some mumbo jumbo about Greek myths and a number of untranslated Marquis de Sade quotes and you have an “unfilmable” literary classic.

But film it they did in 1968 as a lush mystery drama filmed on location in Greece with an all-star cast including Michael Caine, Anthony Quinn, and Anna Karina. The film was and remains a disaster; too esoterically odd by half and featuring a disinterested, miscast Caine in the Nicholas role, it was a box office bomb and financial failure. But, to its credit, it’s a remarkably faithful adaption of the book—too faithful, perhaps. The few inspired deviations from the text—the use of nonlinear flashbacks to provide Nicholas’s backstory, the removal of a racist “black Alabama n****r” character—appear to be Green’s own. But by otherwise clinging to the original book it suffers from the same pitfalls, mainly the preposterous plot twists and suffocating sense of self-seriousness. Apparently, the issue with some books is that they are filmmable. 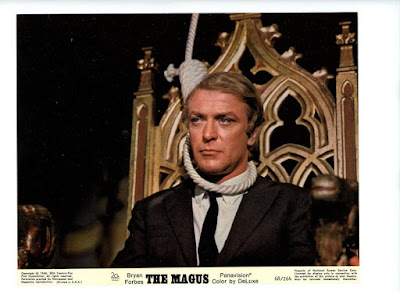