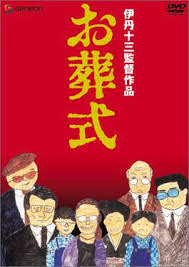 Those who know Juzo Itami only as the director of Tampopo might be surprised by his directorial debut The Funeral. Nowhere in this film can be found that foodie masterpiece’s genre-skipping zaniness, daring tonal dissonance, and sketch comedy asides. Instead, the film is a sober, gently melancholy look at an upper-middle-class family’s preparation for a traditional Japanese funeral.

The film opens with a short introduction to the imminently deceased Shokichi Amamiya (Hideji Otaki), a crotchety sixty-nine year old who has a heart attack shortly (and ironically) after getting a clean bill of health from a hospital physical. From there the film shifts to his son-in-law, popular commercial actor Wabisuke (Tsutomi Yamazaki), as he struggles to organize Shokichi’s wake, funeral, and cremation. Itami observes the specifics of this distinctly Japanese mourning process with the detached, patient eye of a documentarian, taking the time to observe little moments like the ceremonial placing of tabi and zōri—traditional Japanese footwear—on Shokichi’s feet before moving his corpse to his house for the wake.

In his New York Times review of the film, critic Vincent Canby likened Itami’s approach to Jean Renoir, and certainly the detached, wistful eye for humans and their petty failings checks out. But there are moments where Itami almost channels Robert Altman. Consider the lengthy wake sequence as Shokichi’s extended family and friend circles converge. Amidst the hustle and bustle Itami dips his head into various conversations, lingering just long enough to create a micro-scene before moving on to another. All of these are simultaneously framed within the larger context of the wake: Wabisuke’s wife Chizuko (Nobuko Miyamoto) wrangling the wait staff as the unofficial maître d’; a group of Shokichi’s former gateball teammates commiserating over the old days; a possible mistress making a scene at the memorial altar; the clueless menfolk who keep bringing out bottles of sake long after the guests should’ve gone home.

The centerpiece of The Funeral comes halfway through in the form of a silent, black-and-white video diary of the funeral ceremony set to classical music; it’s the closest the film comes to the genre elasticity of Tampopo and serves as a brilliant emotional high tide.

Save an odd misstep scene where Wabisuke’s mistress intrudes and forces him to have sex in the woods outside his stepfather’s house, The Funeral is a lovely, low-key treasure.
Posted by Steve Kopian at April 15, 2020