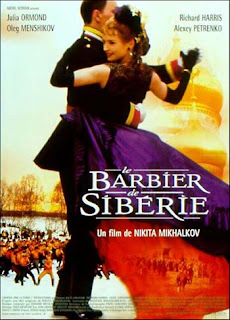 If you want a grand epic, if you want to see a grand romance of the sort that they don't make any more, or if you want a film that is a throw back to the Hollywood widescreen monsters that ate everything up in the 1950's and 60's THE BARBER OF SIBERIA is for you.

Actually if you just want a wonderful film almost no one I know has heard of  much less seen you should see this film.

In doing the Stay at Home Fest this was one of the first films I thought of but I couldn't find it legally streaming (it maybe there but I missed it- if you know where it is comment below). In looking for something else I found that it is on line in a couple of different audio versions are on You Tube.  What do I mean by that, I mean that there is a gorgeous version from a Russian Source that has a narrator speaking in Russian over the English portions (you can hear it under the narration). There is also a version subtitled in Korean which has the English audio but the Russian parts are only subtitles in Korean.  And there are other versions.

I was going to post a link to the best version but that would have been what worked for me and it may not be what works for you.  What I suggest you do is search the film out yourself and see what version works for you and then watch that.

Trust me if you love epics this is for you. Its a hidden gem.

Here is the review I ran a decade ago as what was one of the very first reviews ever at Unseen Films.