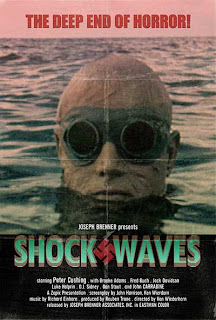 Criminally underappreciated throw back horror film about a group of vacationers stranded on an uncharted island where a mad Nazi doctor is still working on his super warrior project involving zombies.

Say what you will but when the freed zombie warriors come out of the ocean wearing their dark goggles one is filled with a deep sense of dread, sure this isn’t the scariest of horror films, as such, but at the same time you know that good things are not going happen and that people are going to die- badly. It’s one of those moments that once you’ve seen it becomes iconic in your memory. It’s an image that instantly locks the movie in your memory and makes the film something you carry with you.

I’m not going to lie and say the film breaks any new ground. It doesn’t do anything we haven’t seen before, especially if you are a fan of the mad scientist on the loose genre…however what it does do is take the tropes of the genre and shines them up as bright as possible. To my mind this is as good a mad scientist movie as you are likely to see.

I think the film works as well as it does because the cast headed by Peter Cushing sells the whole affair. We believe because they believe. The don’t play anything except straight on. This is the situation so this is how it goes. There is no nudges or winks, just the characters.

This isn’t to sell the technical aspects short. Director Ken Wiederhorn keeps things reigned in and under control. He doesn’t go for big sweeping moments, he keeps it tight and claustrophobic. He and his technical crew wisely don’t shoot for the moon but keep things with in their budget, they don’t try to do too much, which I like. Too many times low budget horror films try to over compensate for their financial short comings by over doing say in the monster department with the result either it’s too good or more often it’s completely over done for its circumstances.

This is a great great exploitation horror film and one any horror film lover worth their salt should see at least once.

Search this one out the next time you’re going to curl up on the couch on some rainy Saturday night
Posted by Steve Kopian at April 05, 2020