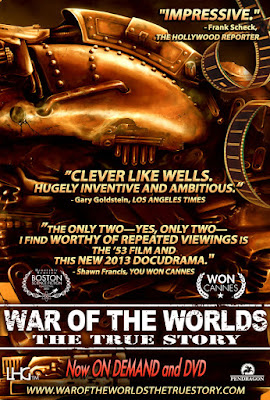 Brilliant retelling of HG Wells War of the Worlds as a kind of Discovery/History Channel documentary. It is in its way quite possibly the best version of the story that I've seen and one of the great finds of the year.

Structured around an interview given by "Bertie Wells" the last known survivor of the War With Mars in 1965 and which sat undiscovered for 50 years, the film is a mix of "actual" footage of the invasion from 1900 along with recreations. It is all tied together with a note perfect narration which puts over the whole thing and makes you believe this was a real thing.

I don't know what to say abut this film other than this is great filmmaking on every level. Perfectly set up to look and feel like the many documentaries that fill cable TV it sucks you in and drags you along from the get go. We believe the film is real because the recreations and effects play out exactly as these sort of documentaries do. We are tricked into thinking it is real because it simply looks real.

One of the best things about the film is that much of Bertie's story and the narration are lifted from Wells book whole cloth. I found myself reciting lines of dialog because I know the book. And while some may argue that Bertie is a bit too flowery consider that he is supposed to be a writer from a time when such flowery descriptions were common place.

I love this film and when it was done I wanted to put it on and go all over again.

Highly recommended, the film is out on home video and VOD including Amazon Prime
Posted by Steve Kopian at April 02, 2020