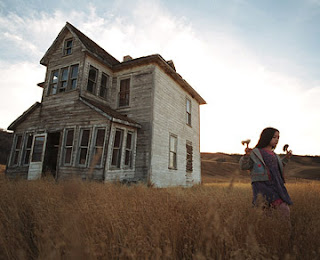 The following is my IMDB review of Tideland. Its is a film that many people hate and a few of us love. Because I like to champion all sorts of films I'm including this.

I've seen Tideland and I'll be damned if I know how to describe it.

Probably the best thing I can say is stop reading this review and see the film. Its a unique experience, however its not one that many people are going to warm to rather they'll be upset by it. The odds are you'll probably not like it, but its at least worth trying, especially if you love film. If you want to know a little bit more keep reading, however my words, and probably no words can do the film justice. You just have to see it.

The story of Jeliza-Rose who's father takes her to his boyhood home after her mother overdoses is a pastoral trip into the bizarre. Set on the prairie, in a world like an Andrew Wyeth painting, this is the interior life of a little girl who doesn't understand the world around her, partly because of her age and partly because of the world she grows up in. Its a very bizarre trip thats part fantasy, part comedy, part horror film, part tragedy, part what ever else you can think of. Its unlike any Terry Gilliam movie and like the darker parts of them. Its the realism of Fisher King and the nightmare and flights of fantasy of Brazil mashed together.

Its not for all audiences, or even all Gilliam fans. This is a profoundly disturbing film. Its very straight forward with these tiny flashes of oddness (which get longer as things go on). In its way its possibly one of the scariest movies of the year, not just because of what we see on the screen but also because of how it echoes out to our own lives and how we see the world being just as cockeyed, we are all in our own fantasy worlds.How Jeliza-Rose sees the world is in its way the same way we all do. Its a scary thought.

Forgive me for not being more specific, this is a film that needs to hit you with out expectations and without preconceived notions, so the less you know the better it is.

I liked the film a great deal even though it made me feel really uneasy. Possibly one of the best films of the year, certainly one of the best Terry Gilliam movies, this movie demands to be seen by serious film lovers and those with an open mind.
Posted by Steve Kopian at April 03, 2020