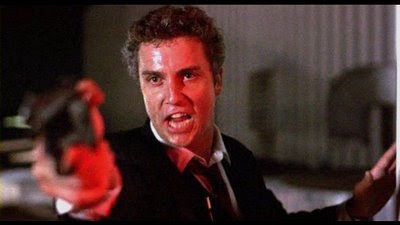 I don’t know if it was this film or Michael Mann’s Manhunter (the original Hannibal Lecter film) that prompted my cousin Anthony to say that it was the last time I picked a movie. It seemed that the combination of the two William Petersen starring films within weeks (months) of each other was simply too much and he wanted to take a long bath and then perhaps, shoot himself.

To Live and Die in LA follows William Petersen’s treasury agent as he, and his new partner John Pankow, chase expert counterfeiter and artist Willem Dafoe. The battle is brutal, ugly and dwells in the dark side of human existence, a fact reinforced by Dafoe’s nihilistic outlook on life.

Actually the film is so much on the dark side that even the good guys are just as bad if not worse than the bad guys. Petersen’s “girlfriend”, played by Darlene Fluegel, is a hooker who is held in check by threats to have her thrown into jail. And just to make sure that no one isn’t covered in shit, when the film ends its revealed that the one character we could like and root for unconditionally is, in fact the biggest bastard of all. 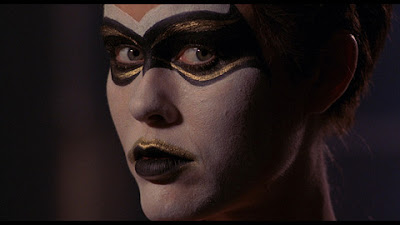 This is William Friedkin operating as his gritty and grimy best. Coming right before his disappeared film Rampage (which I reviewed way back when), this is Friedkin at the height of his midcareer powers turning out small trips to the cesspool. Its a film with both flash and substance which I suspect lead to a generation or two of directors to steal from it's stylings.

What I find amusing is that the film when the film came out it wasn't highly regarded. I still don't think it is.  But it's still floating around. Its a film that many people almost 30 years on are still aware of when many other films released at about the same time are gone. I know the opinion of some, my cousin for example, has improved.

I really like this film a great deal. Its a gritty violent  look at people on the edge of society. Its a film that at times feels superficial (a complaint in some reviews from 85) but which carries a great deal of weight, to the point that it's ending is a kind of a gut punch. Its a film with enough gravitas that it's still around and still making waves.

This is a film to track down and see.