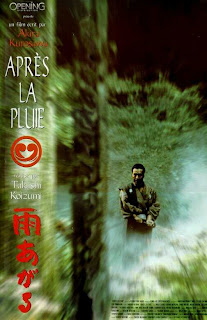 Before he died Akira Kurosawa finished work on a script for a film called AFTER THE RAIN (Ame Agaru). His family brought the script to one of his assistants and asked him to make the movie.

Having seen the completed film I would argue that its one of the greatest films that Kurosawa ever had a hand in making, but that its one film that would have been very different had he directed it himself. The feel of the film is very different from any other Kurosawa film I've seen.

The plot of the film is simple, a ronin samuari waits at an inn with his wife first for the rain to end, and then for the river to go down enough so that he can cross it and continue on his way.

Thats it. Thats the thread-bare plot. And yes other things happen as the samuari meets people but its nothing that I can describe in anyway that would truly explain the magic that is in the film. What ever I told you beyond that would no doubt lead you to believe its something else and if I gave it a straight explaination you'd think you'd be bored silly...when in fact you would probably like me sitting there watching the film with a big ass smile on your face thinking its one of the most charming films ever made.