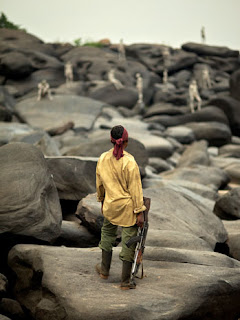 I liked this film when I walked out of the theater but it was a film that haunted me for the rest of the day after I saw it. This quite possibly could end up being one of my favorite films of the festival. I know it certainly is one of the least expected films on anyone's roster of films to see at Tribeca, which is a shame.

Told in flashback, this is the story of a young girl, who at 12 was taken from her village by a rebel group and forced to fight. Drinking the milk of a plant she is given the ability to see the ghosts of the dead and government soldiers in the forest. The ability, which saves her life and those of the rebels on several occasions has her dubbed a witch, and given a high honor.

What can I say. See this film. Its one of those truly special films that haunts the edges of your psyche. As I said I really liked this film when I walked out of it but I found that it's simple, seemingly unsenssational story clung to me over the course of an afternoon of film going. This was the third of five films I saw on the day I saw it and it managed never to disappear from my thoughts, even as I was seeing other films.

I think the film works because it, like our heroine's story is simply told. Talking to her unborn child she is explaining why she may never love it once it is born. She simply is relating the terrible things that she has seen and done, with the result that we are moved. We are there with her. these things happened and that's all. No cry out for meaning, just straight reporting. Its a techniques that has made one of the most haunting films of the 32 that I've seen to date as I write this up.

See this film. Seriously if you go to film festivals to see unexpected treasures then put this film at the top of your list.
Posted by Steve Kopian at April 24, 2012