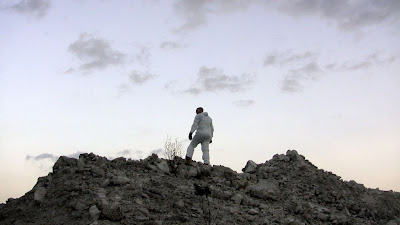 One of my favorite films of the festival Journey to Planet X is a joyous celebration of movie making...and of doing what ever it is that you love for the sheer joy of it.

This is the story of Eric Swain and Troy Benier two friends who met at their day job, the work for the US Geological survey in Florida. When Eric mentioned that he made short films Troy decided to help him and partnership was born. The film follows the pair as they put together their latest film, a half hour science fiction epic nominally called Planet X (though the title is later changed)

The documentary came about because the Brooklyn Underground Film Festival recieved a copy of one of their earlier films. Not sure what their audience would think of the film they turned it down. However, over time the organizers of the festival found that they were rewatching the film repeatedly with friends and family. They then contacted the pair to see what they were up to and the result is a cinematic treat.

This is a film that puts you back in touch with the pleasure you get from doing something you love. Sure the film is about filmmaking but at the same time the process of making the film could be a metaphor for anything you do because you have to, write, paint, garden, fix trucks, dance. If it’s a hobby you do purely for the love then I’m sure the film will touch you in someway.

For me, a frustrated filmmaker, who long ago sublimated making films and replaced it with writing about them, this film got the fires going. When the movie endedI turned to my fellow Unseen Film guys and was like, lets make a movie. It was clear that there is no reason for us not to do it. Yes I know there is so much crap out there thanks to the digital revolution (as is pointed out in another Tribeca film Side By Side) but the kind of filmmaking here is different than that in that this is about following a passion even if its just for us. The film even got me into a good place about why I’m doing Unseen Films.

Yes, Tim and Troy are aiming for recognition and for film festivals and something bigger, but it seems that they are ultimately doing it because they enjoy it and are having fun doing it. I believe that even if they hadn’t met with some success, and the fact that they are the subject of this film indicates some success, I still think they would still be making movies.

As I said at the top this is one of my favorite films of the Tribeca film Festival so far. I’m pretty sure this is going to be a film that stays with me all year long. See this film. Seriously see this film and feel good. 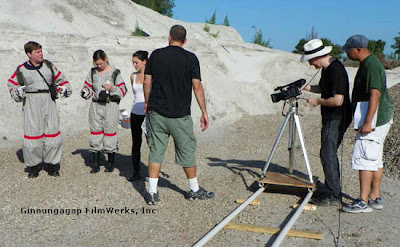