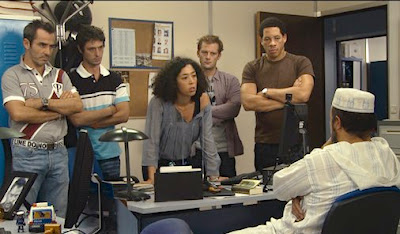 Life does not cease to be funny when people die any more than it ceases to be serious when people laugh.
George Bernard Shaw, The Doctor's Dilemma: A Tragedy

This is real. Watching the cops in this film is like watching the police that criss cross through my office. My day job is in criminal justice and watching this film was like witnessing stories I've encountered and been told come to life.

This is the story of the CPU, Child Protective Unit, of a French police force.We watch over several months as the unit handles a variety of cases and how the job takes a toll on them both personally and professionally, and how they find hope and the ability to keep doing what they are doing.

Look, forget Law and Order SVU. Forget any of the dour films and TV shows about cops who are in the thick of darkness, that's not real, this is. This is cops being cops, making jokes, many black in humor, helping kids, being rattled by what they see and just trying to get along. Its not all gloom and doom, some of it is funny.

One of the most talked about and most anticipated films of Tribeca will move you. Its a kick ass film that seems to get things really right on just about every level. Rarely have I ever seen a film that felt this right...or was this good. Don't get me wrong this is a really good movie, possibly one of the best at Tribeca, which so far is a saying a great deal.

You do have to keep in mind, this film does go into dark places, and there are somethings in this film which you may find troubling or heart breaking. I was leveled by two things in the film, so be warned this isn't always an easy film to watch, as it shouldn't be.

If I must find fault, and you will please for give me if I mention two small flaws that keep from immediately putting this on my best of fest list, first the film is possibly over long at 127 minutes. Don't get me wrong it's gripping, but at the same time I was wondering where it had left to go after a certain point. Secondly the film decidedly dark in the second half. What I thought was a perfect balance of light and dark for what was about the first half of the film, turns darker in the second. It's not that there is anything wrong with it, except it feels more a construction rather than anything natural.

The best thing I can say is, if you think you can handle the subject see this film.