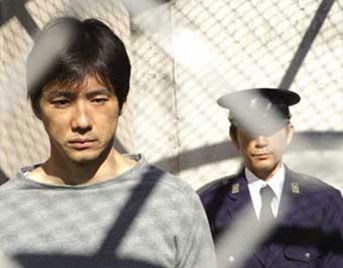 In 2009, as part of the Japan Society's Japan Cuts, and I believe also as part of the New York Asian Film Festival's line up, they ran a film called Vacation. The film concerns a prison guard who meets and becomes engaged to a woman with a young son. Offered a week off if he'll help with a prisoner scheduled for execution, he jumps at the chance since it will allow him extra time off for his honeymoon.

I've explained that badly, but at the same time it's pretty much the way the Japan Society and NYAFF wrote the film up. Going into the film, I pretty much knew as much as I have told you. That's a good thing and a bad thing. Its good in that it keeps your mind uncluttered with details that might color how you view the film. On the other hand its bad in that it doesn't fully prepare you for a film that will get under your skin.

A film where a great deal isn't said, where emotions don't really reveal themselves except in violent explosions, this is a film where we don't know everything that is going on behind the scenes or behind people's eyes. For example we don't ever learn what the inmate did to warrant the death penalty.

It is in its way a cold film. I didn't connect with the film for much of it's running time. Everyone is putting up so many brave fronts that you really don't know a great deal about anyone. Indeed there is a late in the game statement by the guards now wife that she can't remember him ever calling her by name. He is so distant that even she doesn't know what he feels.

To be perfectly honest I don't know what I think of the film. I was cold through much of it, and then as the execution approached I found I was moved, and even disturbed by what I was seeing. There was something about it that was deeply affecting me. I don't know what or why only that I was bothered by it. Perhaps, not knowing what the crime is, and only knowing the person made the execution harder to take. At the same time seeing the ripples of emotion on people who were trying not to show emotions was equally troublesome.

I don't know what I think about the film. I don't know how I would rate it. On some level I don't know if I would even mention the film except that it really unnerved me in some way. It bothered me so much that the film , which was to be the last one before I headed off to bed, instead sparked me to watch something else, something mindless in the hope of clearing my mind. It didn't work and I went to bed and had troubled dreams all night.

As I always said, any movie that makes me feel something is a good movie.

Recommended for those looking for something very unwestern in approach.

Currently only available in the US to the best of knowledge as an import DVD.
Posted by Steve Kopian at April 09, 2012