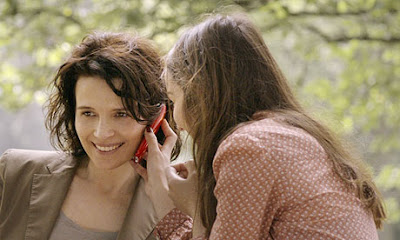 The flaw of the film is the films organization. Ultimately the film is Juliette Binoche trying to finish a magazine story about two young women who work as prostitutes to pay for school on the day she is preparing dinner for her husband and his boss. What transpires  is in two time frames: the now,Binoche cooking, and the past, the girls stories. The stories are intercut so that the stories  happen all over the place. We don't know what happens when until late in the film. There are complications  in that we see a few things, such as one of the girls mother finding a super fancy sex toy, which our outside either the girls or Binoche's ability to know what happened.

The film is a bust to me. Its a pretentious film that wants to be about something but isn't about anything. To be honest I would have put this on my least of the festival list had it not been for the performances and the scenes themselves. The film also has an aire of hypocrisy about it. The press notes say the film is about the hypocrisy the women being paid for sex have to endure. Sadly the film never really deals with that, instead it dwells in the realm of pure exploitation with some some steamy sex scenes (including one involving urination), which is all that anyone is ultimately going to remember.