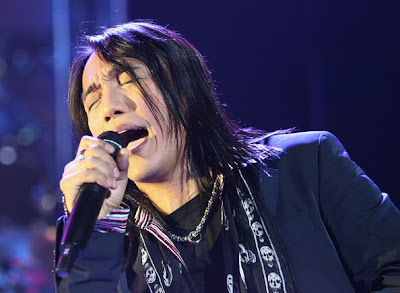 Story of Filipino singer Arnel Pineda, who was discovered on You Tube and brought into front classic rock band Journey after Steve Perry left the band. We watch as the story of the discovery is recounted and Pineda goes on tour with the band.

This is a very good, uplifting story about a guy from "nowhere" who manages to rise over night (he had been singing for 25 years). Pineda is a man of extraordinary vocal talent, sounding very much like the man he replaced, but also having as greater vocal range. Watching his dream come true is a great deal of fun.

...and that's about all I can say because there isn't much to the story that you haven't heard before. Don't get me wrong, its a good film, but there isn't anything exciting other than watching the band play, which is a good enough to see the film.

And that is the films flaw, there simply isn't a great deal here. I can tell you everything in a sentenced and you'll know as much about the subject as you will after watching this documentary. Perhaps had they trimmed this down by a half an hour (this runs almost 2 hours) this might have been a great film instead of just a good one.