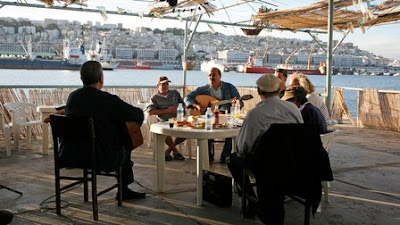 The true story of what happened when a young woman walked into an antique shop to buy a mirror. She started talking to the owner, who over the course of the meeting, introduced her to Chaabi music. This begins a quest that will result in her tracking down the men in the band and ultimately putting the band back together...

One of my favorite films at Tribeca so far is also one of the most joyously happy.

Look, I could tell you everything that happens. I could relate all of the stories told, but what would be the point. You want to hear them yourself. The point of reviewing a film is to give a basis for someone to see the film. Frankly there is nothing I can say because the film has put me somewhere beyond words into a joyously happy place. See this movie.

You will also want to hear this movie for yourself. This movie will make you a fan of Chaabi music. I know it made me a fan.

I should probably warn you that the film kind of slows down in the middle when the film deals with the men not playing. If you're like me you'll notice the lack of music. As the men stopped playing so does the music. Don't get crazy, this is necessary since it fills in the story and makes the return of the music all the more wondrous.

See this and you'll feel good for days afterward.