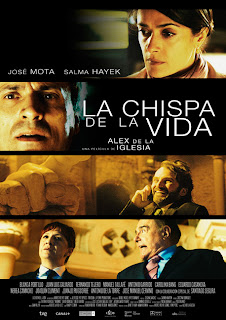 Crappy title for a strange film from director Alex de la Iglesia who did the Oxford Murders and Last Circus. Its a weird melding of deadly serious drama and incredibly black comedy which, sadly, the director never manages to balance.

The plot has Jose Moto playing an out of work PR guy having a shitty day. His wife, Selma Hayek, is talking about their anniversary but all he wants to do is find a job. When he fails to get a job with an old firm, he drives off to make reservations at the hotel he spent his honeymoon. Sadly, the hotel has been bulldozed for part of a museum's new wing. Wandering where he shouldn't he takes a fall and ends up with an iron bar in his head. As he awaits rescue the situation spirals out of control; becoming a media circus which our hero tries to turn to his advantage.

If you melded Ace in the Hole with Death of a Salesman and added an extra dollop of sarcastic humor, you have As Luck Would Have It. This is an ultimately painfully sad film with a tonal imbalance that never makes you feel the way you should. Don't blame the actors, they sell it, blame the script which bounces back and forth between broad comedy and drama, realism and hyper reality. There are a few twists and turns (such as some of the efforts to free Mota) that are not what anyone I know would do. I mean who would let anyone use a jackhammer on a piece of rebar in someones head?

Also blame the score. It’s a dirge like affair that sets a sour mood from the start. The film has barely started and we’re already depressed. How can we feel anything but gloom with music like that? I was down on the film from the get go simply because of it. It outright kills many of the laughs the script has put in place. It wrecks any chance for the film to work on any real level.

And yet the movie affected me on some level. It made me feel something. Yes it takes easy shots at things and yes it covers some well worn territory, but once things get going, once the accident happens, the characters and some sharp writing made me care. Certainly I cared enough to be angry that the film wasn’t much better.

Walking out of the screening I was certain the film was going to be written up as a misfire and as one of the more mediocre films of Tribeca. However, once I was on the train and once I got home I found that as much as the film is deeply flawed, there is still something about it that hangs with you and on some level kicks your ass.

Its not a great film. It’s probably, maybe, possibly, perhaps just barely a good one(or not I'm still not sure)

If you’re a fan of the director it’s worth a shot… at some point. Perhaps going in without expectations (which is how I saw The Oxford Murders) will help.

I should explain why I really don’t like the English title of the film. As Luck Would Have It really has nothing to do with the film. It’s a title that kind of infers more of a comedy, or a film with more irony than this film has. The Spanish title La Chispa de la vida is the slogan for Coca Cola in Spanish speaking countries, which is translated as The Spark of Life, that the Jose Mota character is supposed to have come up with. It’s a term that is mentioned through out the film as an explanation of what he had accomplished. When I asked a Spanish speaking friend about the original title she told me that the actual meaning of the term, and the way she originally translated it, was the joke of life, which she said is what it originally meant. She said that Coca Cola co-opted the term into a happier slogan for their product. I don’t know if it’s true but I do think The Joke of Life is a better title, since it is more ironic. 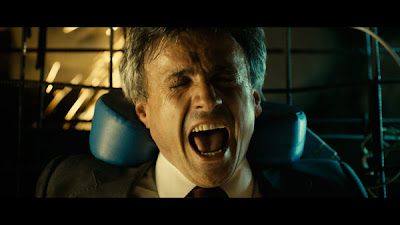