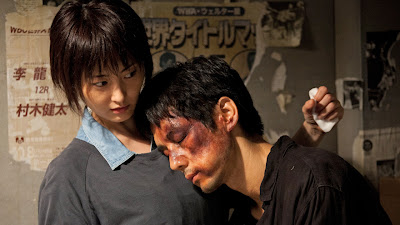 Odd Japanese film made by an Iranian director that bounces between the art house and the grind house. The plot follows a filmmaker who tries to pay off the debt his deceased brother had with some local mobsters. It seems that the brother had been borrowing money to financed three unreleased films. The solution our hero comes up with is to allow the mobsters to punch him at a certain price for each punch. as he gets the shit kicked out of him he rants about pure cinema.

This is a disjointed film that keeps tripping over it's own feet. Watching the brother get beaten up in what seems like an act of atonement is decidedly visceral and unpleasant, but it's coupled with these rants about pure cinema and how cinema used to be informative and entertaing, and they drive the film off the road again and again. (Though the final count down sequence is oddly compelling)

The film is alternately enthralling and distancing, kind of like the on/off switch of a light. The result of the switching back and forth was that once the lights came up and I was walking down the street I found I ceased to be interested.  Its a feeling that was helped along by the sting in the tail ending that simply re-enforced our hero was nuts.

Its worth a shot for all that works but I won't gauentee what you'll think of it.
Posted by Steve Kopian at April 25, 2012