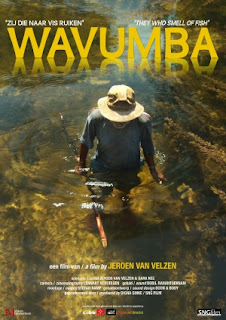 The first film screened for the press was the first miss of the festival.

This odd ball mystical film concerns the director who returns to the island off the coast of Kenya where he spent a good part of his childhood. While a child he heard magical stories from the fisherman and the locals. The stories haunted him and wanted to return and recapture the magic the film documents his return as he talks to a shaman, a woman and goes fishing with one of the last fishermen and his grandson.

I'd be hard pressed to say anything much happens. People talk, they fish and they row out to sea. For a while it's fine since we get some nice local legends, we meet some interesting characters and there are a couple of nice moments fishing on a reef. The trouble is that ultimately almost nothing happens and there are long silences of the fisherman rowing out and fishing. I was intrigued enough by some really good sequences early on, such as the one hunting octopus, that during the deadly dull second half I was sure that things were going to turn around by the time it ended.I was sure that there would be a great AH HA moment that would make it all okay. I took copious notes, wrote down quotes and was ready to write a killer review.

And then the film ended, and all I could think of was I had to try and review a film that had no point. It was a film that didn't end, it stopped,sort of like what happens when someone is telling you this long story and then gets called away before they finish it. I was shocked. I couldn't believe that the film had managed to find its way into film festivals.

What I think happened was the director had all these memories of this great place and these great people I think he convinced someone to put up the money to make a movie about what he remembered. Sadly, when he got back he found it all so radically changed that there was no way to make the film he intended. Sure there was enough material for a 20 minute film but he promised a feature, so he did what any one who was up to his eye balls in debt would do, he shot what he could and then hoped to god that it would all work in the editing suite...it almost worked, he almost had it- except he never got an ending and so he never had a film.

I don't hate it, but damn if its not 80 minutes I'll never get back again.

I think one of my fellow members of the press described it in the way most people are going to feel- its like being trapped on boat and being forced to watch some one fish for several days. I wouldn't be that harsh, since it does have some great moments, but its damn close thanks to the missing AH HA moment and no real ending. 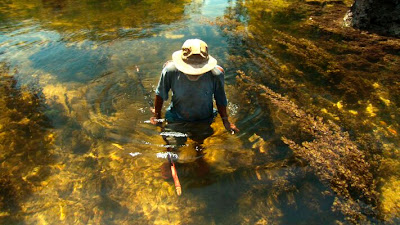