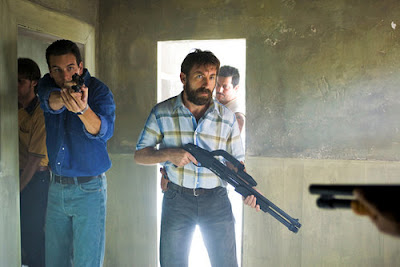 Good, solid action film from Spain tells the story of Unit 7, A group of cops tasked with driving out the drug dealers in Seville before a world expo and financial confrence occurs. Beginning in 1987 and going to the confrence/expo in 1992, the film follows how the team, and two of the men in particular, change over time, taking steps outside the law and getting a bit too big for their britches.

If there is a flaw it's that the film jumps through time a bit too much for a 97 minute movie with the result that several characters get shorted. On the other hand the film has several incredible and very real feeling action set pieces. As films go its one of the stronger films of the festival so far, I just don't have a great deal to say about it because its so good at what it does it doesn't need a great deal said about it other than perhaps its one to see repeatedly.

Definitely worth searching out.