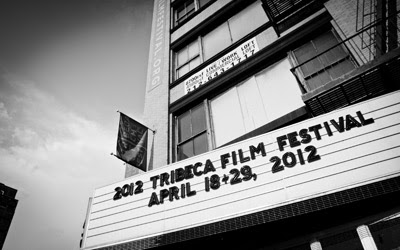 Tribeca starts in 5 days. Wednesday is the big opening ceremonies, celebrity filled red carpets at a big premiere and parties and such. Thursday is the start of the insanity for the rest of us. Its well over a hundred films playing all over the place for 9 solid days.

We at Unseen Films have been in the thick of it since March 27th when the press screenings started.

To date we’ve seen around 27 films and there is going to be at least another 10 more before the screenings stop on Tuesday. Then things start in earnest once the festival starts up. We’ll be jumping from press screening to public screening and back again; to panels and press confrences until our eyes fall out of our heads.

As things stand now AMEX cardholders tickets are on sale. Tickets for Tribeca residents happen Monday and tickets for everyone else go on sale Tuesday.

To help you make choices we’re going to start running reviews tomorrow of some of the best stuff we've seen, one a day between now and Tuesday. From Wednesday onward the reviews will post all over the place. Reviews will continue, often multiple times a day, all the way through the festival, and the week after. You'll be getting at least a review a day, as always, it just maybe on a weird schedule.

I’m sorry we can’t run reviews of everything all at once but it’s simply not possible since we’re going to be writing things up in the short time between movies. We are also limited by restrictions placed upon us by the producers and the festival, so starting Thursday expect reviews all over the place as embargos are lifted.

Expect duplication. With many of us going to the same films there is a good chance that you’ll get multiple opinions. Read them all and make up your own mind.

I’m not going to say that this is the place for everything Tribeca, but if you want to keep on top of a vast majority of the films being run just keep checking back. Or better yet book mark the Tribeca 2012 hash tag and you can jump to the latest Tribeca related posts.

I also suggest that you keep up with Twitter, Unseen's is @unseenfilm and Mondocurry's is @Mondocurry since we'll be tweeting when we can.
Posted by Steve Kopian at April 13, 2012