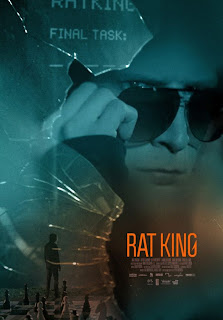 This Finnish thriller concerns a hardcore on line gamer who has his life disrupted when an on-line friend shows up telling him that he's being stalked as the result of playing a certain game. I'll leave it there because either I'm going to give you the BS story that is in the offical description or I'm going to give it all away... which isn't a bad a idea.

This mess of a film starts out intriguingly and then, as soon as it sets the table, goes right off the cliff with illogical twist upon illogical twist (One of which involves our heroes mother and girlfriend not realizing that some one is imperonating him). Despite laying out that there are two people, the film occasionally tries to imply its only in our hero's mind. I won't even get into the mind of the villain who's ultimate plot makes no sense even on its own twisted terms. This is a film that wants to have it every which way but only manages to annoy and bore the audience. Never have I seen a press screening clear out as fast as this one did. I saw this with other Unseen Film writers and we were kind of taken aback that we were the only ones still in the theater half way through the end credits.

It's a well made film that has a script that is so deficent in logic it's easily one of the worst films of the festival.