Tribeca Day 4: Freaky Deaky, Benji and making it up as I go along 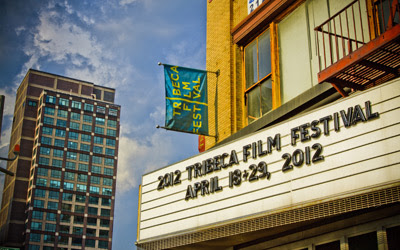 The rain in New York made it a good idea to stay inside. Thankfully, I had a full day of films at Tribeca scheduled.

Tribeca is now now winding down for me. I have about 20 screenings left over the next four days. I can'r believe its all coming to an end. I've been out of the day job for only four days but it feels like its been four months. This was supposed to be a "vacation" but its more like work and I'm going to have to take a couple of days off to simply decompress.

Tribeca I love you, but you're too freaking big. I say that with great love and affection.

Today was the first day where I saw lots of stars. They were wandering around in the Chelsea Cinemas as part of the Tribeca juries. They were outside the SVA theaters where they were doing red carpet shoots.

The theme for today was to see what I could right then. I threw out my plans other than Freaky Deaky and just went with it.

Remind me not to do that again. 3 of the five films today weren't very good.

I'm also NOT going to review the films again. I just don't have it in me to do so.

WHILE WE WERE HERE- is a stark black and White film about a couple who go to Naples. He is a musician with a gig. She is a writer working on a personal project. While he is working she goes to a near by island where she meets a younger man who wakes up her passion. This should have been a great film. It looks good, has good performances, but it also has a central character who is so cold, so closed, so intellectual that there is no life at the center of the film. There is no one to connect to... no that's not right the one person we connect to is the voice of Claire Bloom recounting bits about growing up in the 1940's. You can't make a 90 minute movie where the best character never appears. Its a misfire best summed up by one of the sex scenes where you can name the calculations that went in assembling it and you can not only say what the next shot will be but say when the cut will happen. Its perfect to the point of being fake.

I saw some of THE PLAYROOM,but walked out about a half an hour in. I can't say if the film is good or bad, only that it annoyed the piss out of me. The film is set in the mid 1970's and never felt real. Who are these people? Who lived like that? It looked like it was created based on old catalogs and stereotypical ideas about what the 1970's were like. Having grown up in the 70's, and having been the right age to be aware of things going on, none of it felt real, to the point that any plot was lost on me because I was too busy bitching about the details.

I left the theater and plopped myself down in the lobby making notes and waiting for my next movie. I also ran into Mondocurry who had finished seeing NANCY, PLEASE. We chatted and firmed up the plans for FREAKY DEAKY later on.

The third film was WHOLE LOTTA SOLE. An Irish film about some nimrods who run afoul of a crime boss by having a huge debt, decide to hold up the fish market, unaware it's a front for said crime boss. I hated every character except Brendan Fraser, as an American watching his cousin's business and his lady love, seemed even remotely real...make that likable. I didn't laugh once and after 45 minutes of being truly annoyed I left the theater.

BENJI is one of the best films of the festival. The story of Benjamin Wilson, a promising high school basketball player, its the story of how one person can carry the hopes of so many people, and how even in death he can inspire people for the better. The story of Benji is told by the friends who knew him, the people he affected, and even the man who killed him. This is as moving a film as you'll see all year. I can't say more than that other than see it.

I should add that it was a nice surprise to see Roy wander in before the screening.

After BENJI I headed across the street to see the world premiere of FREAKY DEAKY. Its based on an Elmore Leonard book.I'm not going to say much, Mondocurry, Mr C and myself are trying to decide who is going to review it, but for now know it's a good, but not great film, about the various characters in orbit around a pair of rich and stupid brothers. Set in 1974, the film is done in the style of 1970's TV shows. with lots of references an homages. Not all of it works, but the cast including Michael Jai White, Andy Dick, Crispen Glover, Christian Slater and others is very good. There was a panel discussion and Q&A that followed, which was informative. It deserves a full report so until I can get something up I'll leave it there.

After the movie we three went to dinner at the Rub on 23rd Street. Very good food, very good service. Its so good that Mondocurry and Mr C are going to the place later in the week before more Tribeca screenings.

And that dear friends is it for me tonight. I'm beat and have to get up again tomorrow.