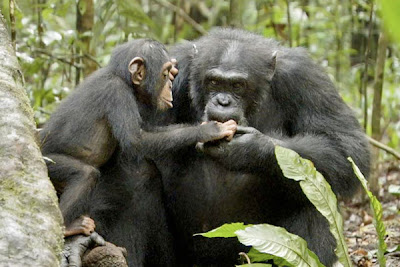 Chimpanzee is the new documentary from Disney Nature that has a special Sneak preview at the New York International Children's Film festival. Its to be the opening film at the Toronto Film Festival Kids Fest.

Banned from reviewing the film because of an embargo (why have public screening if you don't want word to get out?) I decided to hold off on reviewing the film until someone else did or it world premiered or I got word could do so. Despite my best efforts to get permission to run a review no one at Disney got back to me, so I'm running the review now.

The film is the story of Oscar, a baby chimp who is being raised by his mom. When his mother is killed after an attack by another group of chimps, Oscar is taken in by an unlikely suspect...

Narrated by Tim Allen, who for the most part disappears into his narrator duties, this is a good, if over long look at the life of this baby chimp. We get to see what its like to be a chimp in the wild. Its a great looking documentary that makes you wonder how they did it.

The short review is if you liked the trailer you'll like the film. I should also say that most of the parents around me were getting teary.

The long answer is this is a good but too long film that is lessened by the forced family friendly story structure of the film. The fact that we have to go through the film as if its a story made the film less real to me. My over riding desire was to contact the filmmakers and ask how much of this story is made up. Tim Allen is actually a good narrator but things got to the point where I wasn't surprised to hear him talk about more power with a monkey grunt.

For a real life film its incredibly bloodless. The battles between groups of chimps are too frantic to be anything we can follow. Yes I understand things were happening before the filmmakers but at the same time, its too hard to know what happens- chimps, like Oscars mom got driven off? we can't tell. Nor can we tell about the panther attacks. And while I'm not big on watching animals eat other animals the chimpanzee monkey hunt is so family safe and inoffensive to animal lovers that I have to wonder why the hell did you show it?

Actually as beautiful as the film is I think that if most of the film wasn't narrated I'd have no idea what was going on since to my eyes anyway it s a collection of nature footage assembled to tell a fictional (though based on true) story.

I don't hate the film. Its not bad...its just in all honesty not up to the previous films in the Disney Nature series such as Earth, Oceans or Crimson Wings none of which ever felt staged. Ultimately it's worth seeing, though not for full price in a theater-even if its great to see BIG.

I should add that the joy of the film was hooking up with one of the people from my office who was bringing her son to the movies for the first time. He fell asleep fifteen minutes in, but what he saw he liked, as did his cousin who stayed awake the whole time.

(Lastly I'm not sure what kids will think of it. I've been to the NYICFF every year since it started and this was the loudest and most talkative audience ever. I don't know if that meant they were REALLY into the film or they were bored)
Posted by Steve Kopian at April 13, 2012