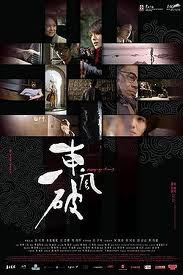 The boomerang effect strikes again. Once more I find I’m writing up a movie that was just okay when I saw it, but which in the days and weeks since I saw it won’t leave me alone. It’s a film that dances in and out of my peripheral film vision daring me not say anything about it. In the case of Merry Go Round I find that the movie has won and I’m going to do a review. (But don’t assume it’s not that good, it is)

Merry-go-round is a multi-character story that starts in San Francisco. Two seemingly unconnected women are heading back to Hong Kong. Eva is an older woman who is going home to prevent her grand-nephew from selling the family business, they sell Chinese medicine, out from under everyone. Nam is a young woman trying to connect with a young man she’s met on line and who is unable to relate to deal with her. Nam is also an addict with an advanced case of leukemia. It wouldn’t be giving anything away to say that the nephew is the man Nam has fallen in love with. Added to the mix is Hill, an older gentleman who maintains a local cemetery. He provides Nam with a place to stay and work…and yes he is related to Eva, being the lover she left behind to help care for people in San Francisco decades before. (And the daisy chain continues as Ella Koon who plays Nam, plays the younger Eva in flashback sequences)

Yes it’s all painfully neat. Yes, it’s almost twee and yes its kind of whatever else you can think of thanks in part to a music score by Ketchup. (You know I actually wrote this review so I could say that). Its also filmed in a way that screams deep meaningful and inde movie scene.

On the other hand the film actually works. It’s a film with characters and heart and a point of view that haunts you and stays with you despite what you may have felt while it was running.

I genuine like the film, however when I was watching the film I had some reservations, most of which had to do with the fact that the pacing of the film is a little lax. Its not killer, but it’s a little too leisurely at times to the point that I kept thinking if this moved a little faster it would be a great film. But then the movie ended and I put the film away and I went on to other things, however over the next few days I kept thinking about it. Moments kept standing out while I was doing other things. I was forced to reconsider my position. Perhaps its not a great film, who cares, it is a good film, and in that case that’s enough. (It’s a good film with ketchup)
Posted by Steve Kopian at April 07, 2012