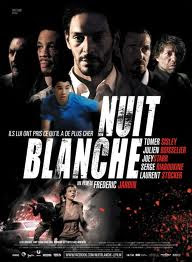 The film begins with a two men robbing some drug couriers of a big bag full of cocaine. The robbery goes wrong and one of the couriers is killed. The robbers are cops and because one of them, Vincent, lost his mask word gets back to the drug lord who took his drugs. He then kidnaps Vincent’s son and proposes a trade. But there are complications which leave Vincent even more battered and bruised and desperate to stay one step ahead of his pursuers.

This was the second film screened for critics at Tribeca and it made all of us sit up bolt up right pondering what was going to happen next. It produced audible reactions from those of us who had managed to stay awake through the sleeping pill that preceded it.

Most of the film is set in a huge night club, where the characters try to maneuver around the partying crowd without alerting anyone to what was happening around them. There are several chases across the night club including the dance floors. Who knew slow speed chases could be so tense? Seriously, if you’ve ever tried to get through a huge crowd you’ll completely understand the helplessness of trying to cross a crowded dance floor.

The battle action is top notch. Nothing goes as expected. People are battered and bruised and they stay hurt. While it's not bone crushing martial arts it is back breaking down and dirty street fighting. It's grab what is at hand and use that. It's get the crap kicked out of you and lie in the stairwell waiting for the pain to go away enough to merely stand up.

And best of all the movie is funny. There are some wonderful off center and strangely appropriate exchanges. We see some bad guys argue about who has the better suit while cleaning up after a nasty fight; at another point a bad guy complains about the use of his cell minutes when his phone is used to bait a trap. They are moments that play like real moments, not action movie ones.

As Mondocurry said the film is constantly surprising.

This is a movie you’ll want to try to see in a theater with like minded action fans who aren’t adverse to reacting. It is in it’s way a quieter cousin of The Raid, but with more plot and more dialog.

See this film. Trust me, it’s a solid popcorn movie of the highest order.

The film is playing at Tribeca later in the week and it’s also screening on demand as part of Tribeca in your Living Room. Either way see it. 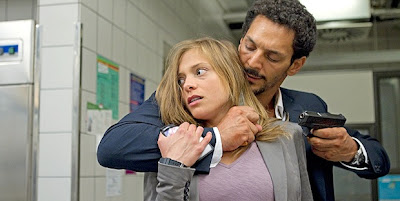