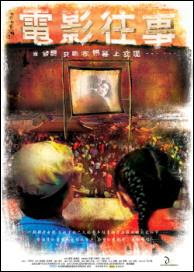 This is a very good little film that has been wrongly compared to Cinema Paradiso simply because both films have the central conceit a love for film and each has a character that is a projectionist. Beyond that the two films are entirely different in structure and in theme. Electric Shadows is the course of a life, not as in Paradiso as a means of finding ones self in ones past (although everyone in this film does), rather it's more a film about finding a course into one's future through the past.

Electric Shadows begins with a young man delivering water. He tells us about his life and about his love of movies. One day while riding to a movie he crashes into a pile of bricks. A young woman appears and, seemingly for no reason, beats him with a brick and then she trashes his bicycle. Confronting the woman in court she simply asks him to feed her fish while she goes off to serve her sentence. Arriving at her apartment he finds that it is a shrine to the movies, with films and film related material everywhere. He also discovers a notebook where she has written about her life as if it was movie.

From here the film shifts gears and focuses on the young woman’s life. Actually it begins with her mother, a wannabe actress, in a traveling theatrical troop. A romance leads to a unplanned pregnancy that is complicated when a mistake has her scorned for playing an unapproved song. Her father flees and her mother is forced to raise her on her own. It’s a hard life that is brightened by a love of film. It’s a passion that is shared by a young boy who briefly joins their family when he is turned out by his father. (Its not revealing anything to say that the boy is the boy who gets brained by the brick),

How the film spins out from there is the film. This is not an always a happy tale, with more than a bit of tragedy in the mix, however through it all is the movies and their ability to transport us and take us away to somewhere else.

Where Cinema Paradiso is a rose colored memory play, this is more a warts and all black and white look at a not entirely happy life. This is not to say it’s a bad movie or even a sad movie rather it’s simply to restate this film is not really comparable to the earlier film.

Sitting and watching this film I was instantly struck by how it wasn't what I expected. I was expecting a film about film and instead I got a film about the life of a young woman and how she came to clocking this young man on the head. Its a much sadder tale than I expected, as the life of the young woman seems to replay some of the pain of her her mother's life. Its also about how reconnecting with the past can make you begin to heal (key word is begin).

I like this film a great deal. I like that the film is decidedly not your typical Western film in construction. I suspect that had someone not in Asia made it we would have either had a Paradiso retread or have it have some forced tragic ending. I like that the ending is kind of open ended. There is hope thanks to the movies. Certainly any western film would not have had any of the political aspects in the story. Granted that the setting of the film in China at a specific time makes the politics, even though it’s on the periphery of the story, alien to anything in the west short of a “political” film (and even that would have been as a small scale independent).

If you want to know why I love Asian film one need only look at a film such as this, which tells a really good story, but which doesn’t follow the same old paths that we see in the West, especially anything coming out of Hollywood. I like Asian film because they tell good stories, especially familiar ones, but in such a way that forces you to see things in a new light. With Electric Shadows we get a not so well worn way of looking at life, at our future and even at the movies (seeing movies really are a means of surviving life).

A solidly good film that is most definitely worth a look see. Currently out on DVD
Posted by Steve Kopian at April 08, 2012