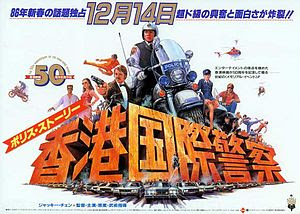 Jackie Chan’s Police Story is the first time that the New York Film Festival looked like it actually would show something that wasn’t an arty farty film (at least to me). Here was a movie that most people I knew would watch. It was a film that had me considering actually trying to get tickets and go to the festival. It didn’t happen (actually my first trip to the festival was not until 1991), but the thought of Jackie Chan, clown prince of Hong Kong cinema, getting attention from the film snobs was somehow thrilling.

It would be a while after the festival before I saw the film, but once I did it was clear why the film was chosen to run, it’s an amazing piece of film making (actually every film in the series is amazing). The film is your typical cops and robbers stuff. Its nothing you haven’t seen before, nor isthe plot anything particularly memorable. On the other hand the point of the film and what YOU WILL REMEMBER are the action set pieces, in particular the opening and closing bits. The opening bus chase, with Jackie using and umbrella to hang on to a double decker bus is still one of the best things Jackie has ever put on film. The final fight in a shopping mall is equally something that hangs in my memory these 25 years plus since I saw it.

I love this film. It’s the one I usually put into the hands of anyone who I want to turn on to Jackie Chan. This is the film to see if you want to know what his reputation is all about.

If you’ve never seen the film you should.

If you live in the New York City area you can see it the way it was meant to be seen, on a big screen. It runs next Monday night at Lincoln Center as part of their look back at 50 years of the NYFF. Its being done in connection with the NYAFF which means expect a stunning introduction from someone connected by the festival- and if we’re really lucky perhaps we’ll coax some hints about the NYAFF out of them.

I'll be there as will many of the Unseen Films writers and readers. Come Join us.

The film starts at 615, which is early, but trust me, it’s worth cutting out of work early to see it. 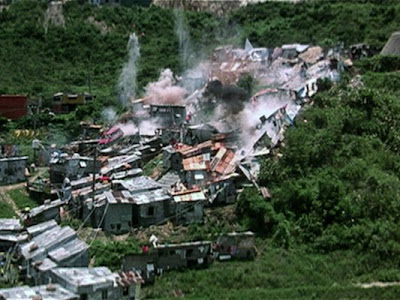