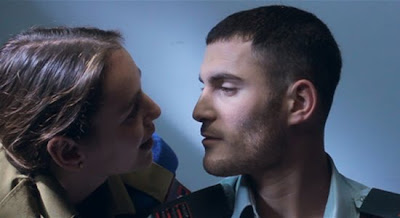 This film is a mess.

Nominally the story of a female soldier, Anna, in the military police who is looking into the use of an officers car for joy riding. It snowballs into looking into the abuse of an Arab family by some well respected, but ultimately loose cannons.

The film is almost as claustrophobic a film as you can have, taking place mostly in the titled room, but also on a bus that takes our heroine, Anna home...

Not that any of that matters, nor even do most of the other characters since the film is almost always focused on the face of Anna.

Seeming to take the style of Dreyer's Passion of Joan of Arc, a film that is told almost exclusively in facial close ups, Room 514 takes things further by not only being a film of faces, but it goes even closer focusing on noses, eyes and ears. Its so over done you'll have dreams of body parts talking to you afterward. Worse the films ultra-close style is coupled with hand held camera work making for a queasy film experience. We are so close and the camera is constantly wavering that objects on screen, ie. body parts, drift within the frame.

The ploy is beyond pretentious and instead of bringing us into the film it drives us away. It's clear proof that having cheap video cameras will allow some of the wrong people to make films. Its also proof of a statement of a DP in Side By Side, a film on digital film making, that the people making films digitally often don't understand what their film is going to look on a BIG screen rather than a big monitor or TV. What works on TV often doesn't work on a big screen.

At this point you're probably saying, what about the script?

It starts oblique and then goes sideways. Nominally the film starts with some silent cryptic sequences then goes into the interrogation of a soldier. This leads to Anna flirting and having sex with her boss, who is due to get married to someone else. A bigger fish is brought in, there's more sex, and some interrogations and a final kind of down beat ending. I'm sure there is supposed to be some deep meaning about the state of Israel and how the leaders make one set of rules but do other things, but it's a point the film fails to make. Frankly the film just makes no logical sense or is in no way real. I kept wondering if anyone connected with this film ever saw any sort of interrogation that didn't take place on TV or in the movies since much of one characters spiel is low a grade version of Jack Nicholson in A Few Good Men. Things get more and more unreal to the point that there is a videotaped session with both accused and accuser in the room with Anna. Really? Really? What planet was this written on? This would never happen in any interrogation by any cops I know.

Gripping? Only if you turn off your brain and bash it with a brick.

You know the more I think about this film the stupider it becomes.

Sorry guys I really dislike this film, which is sad since the cast is pretty good.

One of the most misguided films of the year. Avoid this one.
Posted by Steve Kopian at April 22, 2012