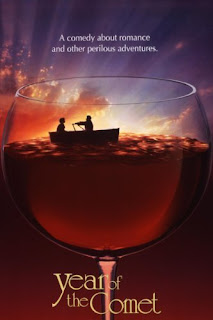 Timothy Daly plays a troubleshooter brought in to help Penelope Ann Miller retrieve a large bottle of wine called the Year of the Comet. It seems its been stolen by one set of baddies and wanted by others. Not only is the wine valuable, but it also hides a secret formula.

This is another one of those films that I love but which very few other people will give the time of day to. Has anyone seen it? Nope, they heard it was bad so they avoid it (this film was roasted when it opened 20 years ago).

The trouble with the film is that it's a second string pairing of leads. Daley was a TV star at the time but he never achieved much big screen success despite being a good actor. Miller is someone who made some awkward role choices so she never got launched into super stardom.

The film also has a script that, when it was made,was considered way too knowing. Blame screenwriter William Goldman who's crafted a romantic comedy adventure that is only a couple of steps away from his Princess Bride.The result is there really is never a sense of danger.

Does any of it really matter?

Not really. The film while not having A string actors still manages to be believable. The script which is a bit twee is also amazingly witty. Daly's "I never said I wasn't..." are an increasingly funny series of gotchas.

I also think the film has aged extremely well. I think the knowing nature of the film which didn't play well when it was first released, now is very much the norm. I think the film is actually a damn fine film that had it been released now, say as a TV movie it would have been a big hit and might have even spawned a sequel or two.

As with most films here at Unseen it isn't among the best ever made but it is is really entertaining.

On DVD and on cable rotation.
Posted by Steve Kopian at April 02, 2012