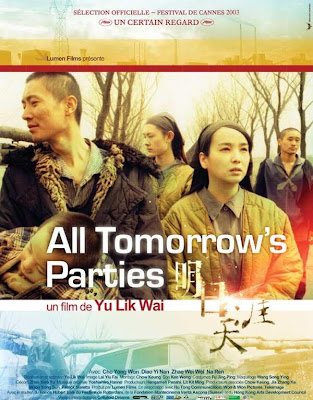 Nelson Yu Lik-wai's tale of a dystopian future is either going to thrill you or bore the living crap out of you. In reading on the film after the fact I saw it I was struck by how no one could not take some stand on the film's quality and meaning if any.

Set in a future when some sort of religious group has seized control of all of Asia the film begins as two brothers attempt to make a break from a work camp. They are captured and tossed into a re-education camp (its modeled in someways on the Communist re-education camps). Several years later it all ends with a whimper as everyone wakes up to find that the leaders have all gone away. The prisoners all wander out into the wilderness heading across industrial landscapes trying to find some mythic safe haven.

Beautifully shot, the director usually works as a cinematographer, the film is a series of carefully composed images that finds a a beauty in even the most decaying of objects or architecture. Without even the sparse dialog the images manage to forcefully create a time and place that is like our own and yet not. Its very much a world that could be where we are headed.

I like the film's cynical look at how the troubles of the new will ultimately give way to new troubles tomorrow. The title of the film is not about parties as in Birthday, but rather parties as in politics. However I should mention that the film is rooted in the people and the characters and deals with how they react when thrown into certain situations.

The trouble with the film, and it seems one of the main reasons the film has so many detractors, is that it's a very long and slow 100 minutes in the cinema. Dialog is sparse. Its not particularly flowing and descriptive, rather it terse and on point. The pacing is slow and drawn out. Some sequences go on a too long. Basically if you don't click with it this film is a really long haul...or as some have said painfully slow.

I'm mixed on the film. I like what it's trying to do, I like how it looks, I like the ideas behind it, but I have a tough time sitting and watching the film in one go through. Lord help me this is a slow film.

Normally I'd probably not recommend this film because of it's pacing, the film is a bit too far on the wrong side of slow, however in all honesty there is something about the film that intrigues the hell out of me. I don't know what it is precisely but what ever it is makes me want say that there is something about it that makes me think that if you can manage to stay with it, if you can accept the pacing then you might find something in it.
Posted by Steve Kopian at April 03, 2012