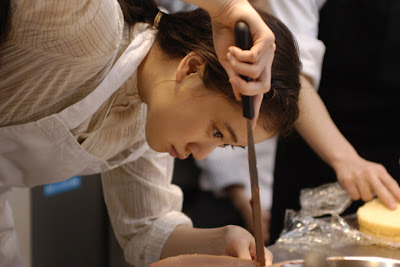 A young girl shows up at the last known job of her "boyfriend", the titled establishment. She is hoping to find him and take him back to their village. Instead she finds that he is gone. With nowhere else to turn, and having worked in a cake shop at home, she talks her way into a job. There she meets a once great pastry chef who now teaches and writes after an accident left him unwilling to cook.

Yes you've seen some of this this before.
No it doesn't break any new ground,
But damn if it doesn't put a smile on your face and rumble of hunger in your tummy.

Buoyed by some great cinematography and some charming characters this film hits all of the right notes to make it a feel good film.
I should say that despite the film looking like a romance, it isn’t. The film is actually the story of two people orbiting each other and changing their lives and those around them. The catalyst for change is our young lady from the sticks, who finds that there is more to life and cooking than her goofy ex-boyfriend. She then affects the lives of everyone else, especially the once and future pastry chef.
While operating in familiar territory, the film isn’t truly cliché. There isn’t any real romance in sight (which is something most films like this would have had front and center), and after hitting many of the usual points in the first half the film veers into less familiar territory with a couple of twists and wrinkles that aren’t quite what we expect.

Definitely worth tracking down.
Posted by Steve Kopian at April 11, 2012