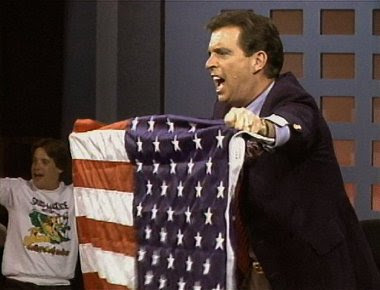 A great look at Morton Downey Jr and his place in social history. Its a place that is either one of honor or hatred depending on how you look at things.

Morton Downey Jr was the son of a well respected singer. Despite trying his best to get his own singing career off the ground, Downey bounced from job to job until he ended up with a "talk" show on channel 9 in New York. His confrontational style and right wing leanings hit a cord and forever changed TV as we know it.

A mix of archival footage, new interviews and animation, Evocateur drops us into the world and life of Downey. We get to know the man who was a friend of the Kennedy's, who had father issues, who loved woman, and in many ways just wanted to sing. Its the story of a man who was good at pushing buttons and who managed make, and lose a fortune in a short period of time. Despite what you may think Downey's hey day was only about 2 years before the freak show got out of hand and everyone abandoned him.

One of the better films that is screening at this years Tribeca this is a film that tells you more about the world than its subject. You understand how program like Downey's could end up on TV. You also understand how it created a world that we are still living with. As for it's subject here is a film that makes Downey more than just a loud mouth, it shows him to be a complex individual, who had more going on than any of us suspected.

I really like this film a great deal and I hope that it gets some sort of wide release since I'm looking forward to seeing it again and sharing it with friends, both Downey fans and haters.

Worth tracking down.
Posted by Steve Kopian at April 27, 2012