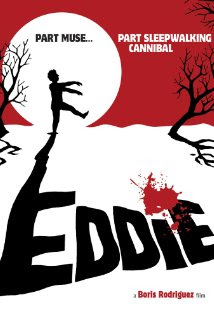 Nothing like watching a screamingly funny black comedy with an audience of people in tune with it.

My pick for the Tribeca Film Festival's Cult Film of the Year (and one that's in the running for my best of the year list). Its a damn funny movie that milks it's twisted take on things all the way to the end.

I'm torn as to how much to say.

The short and sweet version of the plot has Lars going to the small Canadian village of Koda to teach art. Lars is a painter of some reputation who has been in a ten year dry spell. When he is asked to take in the mute Eddie, he quickly learns that in times of stress Eddie sleepwalks and eats things, rabbits, dogs...people. Seeing the carnage left by Eddie sparks Lars to paint....

Bloody, tasteless and one of the funniest horror comedies in years this film is a ghoulish delight. Its a film that is blessed with great cast and a pitch perfect script that has great lines (all of the opera DJing for example) and has more than just ghoulishness on it's mind. As Mondocurry said, the film takes the piss out of the art world.

This film is a great deal of fun.

The best thing I can say is see this film as soon as you can because otherwise your friends will be telling you about it instead of the other way round. Trust me this is going to be a cult movie classic. (no really this is a must see, three weeks in and everyone who saw the film at the press screening is still talking about it and listing it first or second as the film to see.)
Posted by Steve Kopian at April 16, 2012