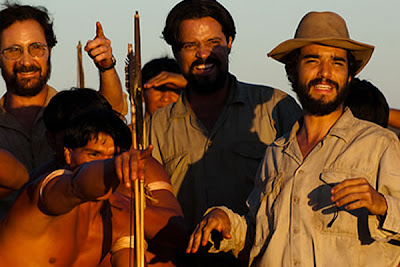 Something inside them dies forever everytime we get near.

Another amazing film at Tribeca...

The true story of the Villas Boas brothers, who in search of adventure leave home and pretend to be poor so they can get a job building airfields in the wilderness. This puts them in contact with the native populations. Their contact with the natives turns in to a desire to protect them and their culture, and a life long battle.

The first thing you have to do is throw out your expectations. I was expecting a typical three act structure with a tragedy in the final third to drive things to the end, but instead I just got the flow of life. As much as I like the film now I expect that I’m going to love the film more the next time since I’ll be willing to take it on face value.

This is a wild adventure that drags us, like it’s three main protagonists, along on a grand journey. Our heroes had gone to the jungle in the hope of finding adventure and we in the audience have gone to the movies for a similar reason. In both cases we have found the same magical thing.

This great looking film reminded me at times of some of the jungle films of Werner Herzog. There is a real sense of being there, of being in the places shown. This is not a studio recreation, this is the jungle and the wide expanses around it.

The film also reminded me of Roland Joffe’s The Mission (which starred Tribeca FF founder Robert DeNiro) with the battle between civilization and the native people (though no one goes over a waterfall on a cross here.)

We help those who are already lost

For me the film scores extra points because it deals with lots of weighty issues and doesn't give simple answers. Things are all grand adventure until the flu arrives in the jungle. It wipes out half of a village because the natives have never experienced anything like it. This is the first of many times when intrusion of mankind destroys the native populations. There is also the battle between the brothers and racism, not only with the outside world, but within themselves as two of the brothers end up fathering children with local girls.

I should point out that the film doesn’t spoon feed you with what is going on. You have to watch faces and look at gestures to see what is going on inside. Time passes, some thirty years is covered, and much of the passage of time is revealed by a change in glasses or hairstyle, a belly bump, and occasionally a nondescript screen title (two years later).

Distance or not, in the end the film moved me. From the narrative’s absolutely perfect final images through to the news footage of the actual brothers, I was touched and at a loss for words. Thankfully the end credit music (which like the entire score is excellent) allowed me to sit in the dark and collect myself. Even so when the film ended I sat in silence for several moments.

If you want to know why going to film festivals such as Tribeca is a must for anyone who loves films, it's so you have the chance to see magical films such as this.

One of the finds of the year. 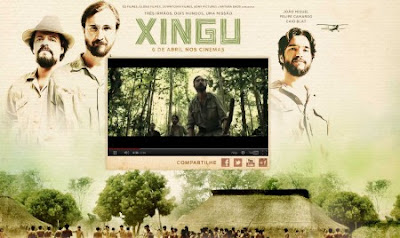