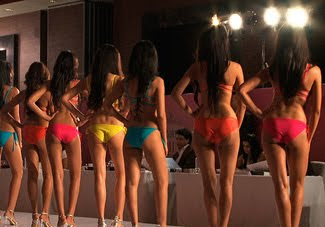 Amazing documentary about how women perceive themselves and are perceived in India. Focusing on two groups of women, those in the Miss India Beauty Pageant and those attending a nationalistic Hindu camp the film paints a portrait of a culture in flux, clinging to the old, reaching for the new with all of the country's young women caught in the middle.

The first half of the film more or less shows two ways women are being empowered, however at about the half way point things begin to turn and all is not right with the world. To be certain there were hints. Through out the first half we see Hindu extremist violence that injured and killed women across the country. As the film moves into the is second half we understand why some women are choosing to be in a beauty pageant, while others are being trained to take up arms.

I dare you not to be moved as two of the women's stories of being allowed to live are recounted. One is recounted by the mother of one the pageant contestants. She left her husband when he insisted that his second daughter be killed right after birth. She insisted that it was a mistake and that the girl would make her proud (and she was right). The other is the story of one of the girls from the camp. She speaks of how her father has a right to beat her, and burn her with hot iron, because she had been bad, and because he had allowed her to live after birth.

If you're not Indian, or brought up with similar ideas, you'll probably be staring at the screen in disbelief. I know I was.

I know I was hesitant to see the film but it was recommended by Peter Gutierrez who's opinion I trust highly. Ultimately I went more because I had an open slot, rather than because of a great desire. I'm glad I did. This is a real head trip film. Its a film that makes you sit up and ponder gender roles not only in India but elsewhere.

You'll forgive me if I break off at this point and simply tell you to go, this is simply a case of a film being better to see than to read about. Go see the film and draw your own conclusions.

One of the better films at Tribeca
Posted by Steve Kopian at April 29, 2012