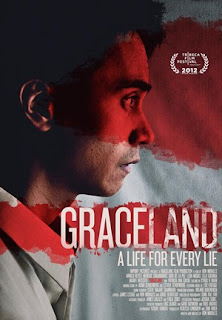 I watched people straggle out of the film on the afternoon I saw it rattled by what they had just seen. One lady looked distressed as she left during a brothel sequence.

On the other hand this is one of the best films at Tribeca this year, and possibly of the year.

To be perfectly honest I don't know what the hell I think of this film, but if a film is supposed to provoke a reaction, then this film is gangbusters. You will feel something...whether you want to or not.

The film concerns, Marlon, a driver for a congressman. When the congressman's daughter gets kidnapped, Marlon's daughter is taken too. Complications arise from the get go and it throws our hero into the thick of it with everyone out to get him. (I could say more but to do so would smooth out too many of the emotional bumps, and I don't want to do that.)

A variation on the basic story found in the Mel Gibson film Ransom or Akira Kurasowa's High and Low this film takes it off into dark, black, sleazy directions. Its a world where no one is clean and everyone is playing an angle. Trust me on this, by the time this film ends and you stagger from the darkness this film will have flopped you in how you feel about every character on screen at least twice. Reading my notes, a running commentary on the ups and down of the film I found that My feelings changed again and again for everyone with perhaps the exception of ur hero's daughter.

When Mondocurry called me after seeing the film at the pre-festival screening, he warned me that this might be one of the more depressing and disturbing films of the year. He was, as always, right on the money. Its so dark that in addition to taking notes I started to doodle in my note book because I didn't want to know...

In it's way the film is a masterpiece. It's a film that provokes a strong reaction in the viewer and I can't help admire that. I can't say whether I like it, but damn I admire it.

This is one of the best films at Tribeca.
Posted by Steve Kopian at April 23, 2012