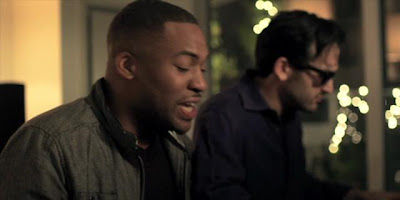 Semi-autobiographical story that was shot in twelve days tells the story of two editors working on fixing a merely okay romantic comedy about a dog walker (or is it a dark film about pet euthanasia?). They they fix the movie their private lives begin to bend and shift.

This is an often very funny film that didn't quite work for me. Other people really liked it, but I couldn't get past its disjointed story (what is this about really?), its technical flaws (for a film with a hysterical scene about re-recording a single line of dialog the sound is a mess), unlikable characters (Alex Karpovsky as Nick is annoying instead of endearing) and it's abilty to make all of it's great New York City actually seem like its was filmed some where else (despite my ability to pick out almost every street).

I kind of liked it but I didn't love it-even if the dialog is often sharp. Wait for cable.
Posted by Steve Kopian at April 26, 2012