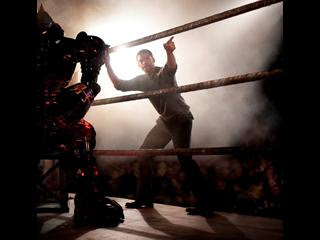 There are going to be some spoilers about the source story, the Twilight Zone episode it inspired and this film as well, so if you don't want to know stay away.

Based on a Richard Matheson story that was turned into a classic Twilight Zone episode Real Steel is has been turned into the sort of movie that many people have claimed that Hollywood doesn't do any more. Amazingly all that we needed to happen was to have a good script and the right cast come along.

The plot of the film has a down on his luck ex-fighter, now robot jockey (Hugh Jackman) finding out that his ex-girlfriend, with whom he has a child, has died. The boy's aunt has sent someone to bring in Jackman to the custody hearing. Jackman agrees to sign the boy over to his aunt and uncle for a 100 grand (they are rich) at the end of the summer. Over the course of the summer father and son begin to bond as the pair stumble on a robot boxer which is good enough to make them a great deal of money.

This is nothing less than an old style feel good Hollywood film. It's exactly the sort of film that Hollywood is accused of not doing any more. Its a fairy tale of the highest order.

Its not deep, but damn it makes you feel good.

The film pretty much does everything right. First and foremost it lightens up the original story. The original story (and the Twilight Zone episode that was based on it) has a down beat ending as the human sized robot is replaced by what would be the Jackman character, who is then beaten to death in the climatic fight. Here things are far from that dire simply because the robots are too big to be people... and things are never life or death.

I also appreciate that the characters really arc. Hugh Jackman's character for example really changes. He starts off as a jerk who essentially sells his son and changes into a nice guy who loves his son and makes the right choice about his son's future for the right reason.

I really like this film a great deal, I didn't expect to but I did. There is something about it and it's smarmy nature that sneaks up on you and makes you smile. This is a film that made me feel good and remember why I fell in love with the movies all those years ago.
Posted by Steve Kopian at April 04, 2012