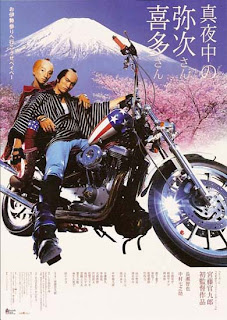 A "cult" film that will probably never find a cult...

Destined to become a cult film, this film is NOT for all tastes but for those open to its insanity its unique walk on a wild and wacky side

This is the story of two samurai in Edo period Japan who are in love. One is married, the other is a drug addict. They decide that in order to make things right they will go on a trip to Ise Sanctuary, where its presumed, everything will be made right. What happens once they get on the road is the movie and its as wild and wacky as anything your likely to see. There are numerous puns, both visual and verbal; we get bodily function jokes; gender bending characters; gay jokes; spoofs of films and music (and musical numbers); trips through time and space; a search for "my reality", drug induced hallucinations; romance and other things I was laughing too hard, or too shocked to noticed. Its a movie made for the filmmakers and whom ever will click into their strange mind set.

Frankly its hard to describe what happens since much of it is so out there that to hear about it out of context will not make any sense (office girls on parade? Zombie Bartender? Born to be Gay?).Its probably more fun to discover the weirdness on your own.

The film is not perfect. Its over two hours and probably could be trimmed by twenty minutes. The film also gets rather bizarrely surreal at times and it becomes almost too much. There is only so much one can take in before one hits the over load button. You probably won't like or get every joke or reference, I didn't, but I have to give it points for keeping at the craziness at all costs.

Still for those are open to crazed, silly/clever films that the term "off beat" is too weak a word you've just found your holy grail. Actually this film is so crazy that there is a good chance it will never even find its well deserved cult.

9 out of 10 for sheer originality and audaciousness. If you you're into off beat films and original visions look no farther this is the real deal. If you can't handle anything off center stay away, far away.

A unique cinema experience.
Posted by Steve Kopian at April 12, 2012