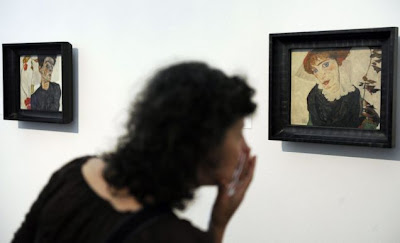 Film chronicling the theft and return of Egon Schiele's portrait Portrait of Wally.

Portrait of Wally is a painting of Schiele’s mistress. It is part of a pair of painting, the other being a matching self portrait of Schiele. The painting belonged to Lea Bondi, a Jewish art dealer in Vienna who was an early champion of Schiele. When the Nazi’s came to power they seized her gallery and the painting from her home as well. After the war she tried desperately to get the painting back which ended up in an Austrian museum and later in the hands of a collector Bondi had contacted in the hopes of having him reclaim the painting for her.

When in 1997 the painting ended up in the Museum of Modern Art, the Manhattan DA’s office and later the US government stepped in to determine who actually owned the painting. It was a move that set off 13 years of legal battles and rude words.(David D’Arcy, one of the directors, is a former reporter at NPR who was fired for doing a factual report because the money men behind NPR and the museums caught up in the case didn’t like that he didn’t tow the BS party line)

I’m not a fan of the film. To me it’s an hour long TV special doubled in length so it can be released as a feature film. The problem here is that they simply don’t tell us enough to fully connect to the story. There is an assumption that we already know who Schiele was, that we know about the Nazi’s, that we know how the big museums operate and that we know about the efforts to repatriate looted art, all of which are points the film only kind of sort of fleetingly addresses. I know about all of them on a larger degree than the film goes into but I still felt like an outsider listening to a conversation I’m not part of.

There is an exciting story here, but it only comes alive infrequently when we have all of the information to fully grasp what is going on. As I said, the amount of information is equal what you would get from a short Discovery Channel special. It’s not bad, but it doesn’t warrant being 90 plus minutes long.

Ultimately it has the aire of being a self important, self absorbed puff piece saying how wonderful some of the people were and how bad others are. Its more concerned with pointing fingers and puffing people up rather than informing or saying why we should care.