Ranting about First Winter (2012) or the trouble with making cheap digital movies. A lesson from Tribeca 2012 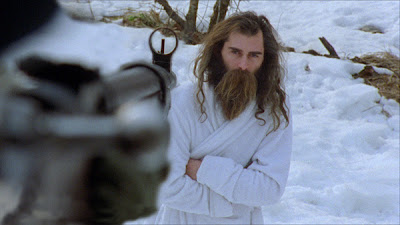 "That one made me lose my appetite for cinema"

"This would have been so much better with zombies"

Comments heard after the screening of First Winter

This is a two fold review. I'm going to review it (or in this case pick on it mercilessly because I had to see it without being able to riff it in classic Mystery Science 3000/Riff Trax/ Cinematic Titanic style) and then I'm going to talk about something more troubling.

First Winter is a mess. It's a long winded pretentious pompous piece of cinematic trash that is painfully dull and incredibly stupid. Its well made technically,and it has some good performances not to mention a sure bet for the winner of the Oscar for man with the most serious facial hair.

The plot of the film has a bunch of people hanging out at the farm house of yoga guru Paul. Paul is a man with a huge freaking beard and a moustache that is just as long as his freaking long beard. The group goes to bed and wake up to find that the power has gone out. There is some report on the radio of a storm (or something it's not clear). As they wait for things to clear everyone eats, gets stoned, and has sex. Paul proves he's a hit with the ladies taking several to bed at the same time. Some people drive off and go to town and are never seen again (or if they come back, I don't remember who went, it's never mentioned again and the car disappears). A young woman wanders in and hangs around. More sex. People wait for something to happen, but until they find out that the preserves are bad no one really does anything.

That's the problem here, no one really does anything. And when they do do something it's makes no sense....

Okay let me talk about some of the many things that don't make sense.

The radio talks of snow and a blizzard, but the farm while having a coating of snow is not in the least snow bound. How unsnow bound is it? You can see the ground under the snow. You can see the brown leaves, the grass. The snow where it exists is often much less than an inch deep.

When they see a cloud in the distance it comes as a surprise. They have no idea whats going on and make no effort to find out (or explain it to the audience), preferring to just sit and listen to the radio, which occasionally works, but mostly doesn't, and which when it works kind of mentions looting in a garbled broadcast, but never explains why. How can you start to explain something and then stop? The result is a slide into the apocalypse that makes zero sense.

This is the biggest problem with the film is the whole central conceit and back story of the film doesn't work. Its operating in a world in the director/screenwriter's head. Its a problem that isn't even explained away in the official material which just talks blizzard and cold.

Lets talk about things on the page and not on the screen...

The first thing the official synopsis talks about is how the the people in the farm house are Brooklyn hipsters. Really? When is that mentioned in the film? Never that I remember. Granted they are clearly some sort of dim witted city folk since they can’t do much of anything, but its never expressed, at least not as specific as Brooklyn.

Secondly, what’s the deal with this whole apocalyptic nonsense anyway? Something somewhere and the whole world goes to hell. Again the official material says a cold and blizzard, but there is no indication of it in the film. We never see a storm-we never see snow. As I said the snow in the film isn’t that deep. And as for cold its not that brutal as we can see by how the people are not that heavily dressed and how Paul walks out in a bath robe.

Let's take it further how can you have a “storm” so bad it destroys the world as we know it? No clue.(and don't get me wrong, the world is done or implied to be done by the grand acceptance meditation scene that ends the film- meditating and watching the sun rise) There would have to be something somewhere still functioning, hell, there should be more people than those at the farm house, right?. However no one comes to contact them and they make no effort to contact anyone. They just sit and wait… because? Because civilization is over? And you know this how?

It's this whole thing of the world coming to an end outside the borders of the farm that makes zero sense.

Obviously no one understood that you need some sort of back story for this to work. Even the stupidest apocalyptic film makes some effort to explain why it all went to hell. This one makes none.

And then there is a discussion of there only being enough food for a few weeks. Which makes me wonder where the hell are these morons anyway? Isn't there some place they can try and get food from? Why can't they leave the farm? What are their feet broken?

How about conservation of supplies? These people pig out until there is the out of left field twist that the preserves maybe tainted. So what do they do? They pitch all the food instead of finding out what is and is not bad.

Okay, eventually the realize there is a problem slurping down the food until it's gone, but it takes even longer before anyone notices the candles. Its not until a late in the game candle making session before they stop burning candles as if the farm is a branch of Yankee Candles. Didn't occur to them to conserve? I mean the food is running out why not candles?

Actually the group runs out of everything but things to smoke. Really? Really. What did they grow on the farm anyway?

Next point mind numbing point- they find a limited number bullets for the gun so they can go hunting-and then they promptly go target shooting.WTF? One shot I understand by multiple? I bet if you counted bullets and shots they'll have shot more bullets than they find.

Pretty much no one does anything other than Paul for much of the film. The world ends and you just sit and wait for someone to save you? Actually until Paul gets sick they don't do much but brood.

There's more but I was too bored to care.

Why was I bored? Because nothing much happens. Yea, there's some sex and deer is skinned but not much else. This is proof that the apocalypse will kill us all with boredom.

I stared at the screen hoping something, anything remotely interesting would happen. Mostly I wrote out a running commentary to the inaction on the screen and I pondered how long Paul would have had to have been growing his moustache for it to be as long as a his beard.

This is the dullest end of civilization story I've seen.

It doesn't help that the whole thing seems to be shot to be a Dogma 95 film with hand held cameras and existing light (hence the abundance of candles). Its shot so close at times that we're not in the action but sucking on someone's ear or so close with someone that we can't see them. I get the idea of hand held cameras allowing us to see things in ways we never could, but it also gives us angles we don't want.

In writing up the 27 films I've seen at Tribeca so far, I find that I keep going back to somethings that were said in Side by Side a documentary showing at Tribeca about digital film making.

First that the digital revolution has created a whole generation of filmmakers who don't understand that framing a film on a monitor, no matter how big, isn't the same thing as seeing it on a screen in a movie theater. What looks good on a monitor, the closeness of image, and whipping camera motion is killer on the big screen. I doubt that much of the first third of this film would have been shot the way it was if anyone had actually looked at it on a big screen. Granted it's not as bad as the ultra close ups of Room 514, another of the few dreadful films I've seen this year, but it's still bad. In Room 514 we are always focused on the heroine's face or some part of it, to the point I wondered if the film was about people or body parts. (I'll be reviewing that film, and Side by Side in the next couple of days)

The digital revolution is making films that are painful to see on a big screen,which will kill the communal nature of the movies. I know I stay home because some movies look better on a TV. This film, I imagine, will look better on a TV, assuming you actually want to see it.

The other problem with the digital revolution is that has allowed people who never should have made a film to do so. We are now getting films from people who now have the equipment but not the talent to make films. While I will not suggest that director Benjamin Dickinson can't make a good looking film. He can. What I can suggest is that screenwriter Benjamin Dickinson should have his laptop or what ever he uses to write with broken. He's come up with one of the most pretentious pieces of trash of the year.

Literally my first trip to the Tribeca Film Festival years ago was to see a dog of a movie. It was so bad that I came up with a rule named after it. The film was called Buried Land and the rule was that if you were suffering through a movie and felt that the only way to make it better was to have a character walk into a mine field, you should get up and leave because it never was going to happen. In this film, I like the above commenter was waiting for the zombies to attack, or a spaceship to land, but it never happened.

First Winter has created a problem now that I'm reviewing films on a press pass...how do you walk out of a film that meets the Buried Land standard when you have to review it?

If you figure it out let me know. Until then avoid this film unless you are trashed off your ass with friends and you need a movie to pick on.

(And be warned even once the end credits finish the music will drone on to chase you from the theater.)
Posted by Steve Kopian at April 19, 2012

Email ThisBlogThis!Share to TwitterShare to FacebookShare to Pinterest
Labels: american, drama, not worth the effort, science fiction, tribeca 2012